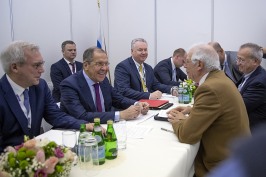 On 5 December 2019 Foreign Minister Sergey Lavrov had a meeting with High Representative of the European Union for Foreign Affairs and Security Policy Josep Borrell on the sidelines of the OSCE Ministerial Council meeting in Bratislava.

During their conversation, Sergey Lavrov and Josep Borrell discussed specific ways of overcoming the protracted period of stagnation in Russia-EU relations. The Russian party underscored the fact that the resumption of mutually beneficial, equitable and respectful collaboration in the sphere of coinciding interests between Russia and the EU would meet the interests of the countries and nations of the entire European continent. The parties emphasised the need for and mutual benefits of launching detailed dialogue between the Eurasian Economic Union and the EU. Both sides said they were interested in expanding the practice of political consultations between Moscow and Brussels.

They also discussed a number of international topics, including prospects for resolving the domestic Ukrainian conflict in the context of the upcoming Normandy Format summit, and touched upon the situation in Syria, the entire Middle East and that around Venezuela.