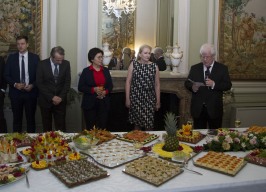 On 10 December 2019 a reception on the occasion of the thirtieth anniversary of the Russia – EU relations was held at the Permanent Mission of Russia to the European Union.

Thirty years ago, on 18 December 1989 the Agreement on Trade, Commercial and Economic Cooperation between the USSR and the European Communities was signed. This event is considered as a starting point in official relations of the parties.

As Permanent Representative of Russia to the EU, Ambassador Extraordinary and Plenipotentiary Vladimir Chizhov noted in his statement, taking the decision to conclude such an agreement Moscow and Brussels proceeded from the assumption that their partnership would be sustainable and long-term regardless of tactical political and economic fluctuations – that, in other words, it would have a strategic character. Make no mistake: no significant international problem can be resolved without Russia, and our tasks on the international arena are converging in many aspects, far beyond the so-called “selective engagement” strategy.

To celebrate the anniversary in a solemn atmosphere members and employees of the European Parliament, various divisions of the European Commission, the European External Action Service, colleagues from other diplomatic missions, businessmen, public figures and media representatives joined the event.