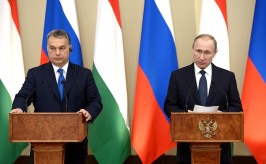 President of Russia Vladimir Putin: Ladies and gentlemen, let me brief you on the results of our work.

First of all, the talks with Mr Orban were constructive and business-like in spirit. We discussed the key aspects of our bilateral cooperation, reviewed the results of our work together over the year since our last meeting in Budapest, and outlined future cooperation plans.

Russia sees Hungary as an important and reliable partner in Europe. We sincerely value the Hungarian government’s consistent efforts to develop our friendly and multifaceted bilateral relations.

Our countries have regular political contacts, including with our parliaments’ participation. We have contacts through our foreign ministries and other agencies, and we also have the Intergovernmental Economic Commission. Our trade ties are traditionally close and mutually advantageous. Russia is one of Hungary’s three biggest export markets outside the European Union.

As is known, our bilateral trade dropped considerably last year – by 40 percent. This noticeable decrease is due above all to the current circumstances, of course: exchange rate instability, volatile energy prices, and, it must be noted, the sanctions the EU has imposed against Russia. I am sure that with time, we will set our trade back on a steady growth track, which is in our common interest.

Let me note too that Russia and Hungary have built up considerable experience in investment cooperation. Russian companies’ capital investment in the Hungarian economy exceeds $1.5 billion, and Hungarian investment in Russia’s economy comes to more than $2 billion.

We are developing our cooperation in industrial production and transport machinery, construction, and mining. We have carried out large-scale projects in high-tech sectors, including the pharmaceuticals sector. The Hungarian company Gedeon Richter has begun producing medicines in Russia, in the Moscow Region.

Energy is another priority for our bilateral cooperation. Russia supplies more than two thirds of Hungary’s hydrocarbon energy needs: 75 percent of oil needs and 65 percent of demand for natural gas. Last December, Gazprom extended a gas supply contract with our Hungarian partners to the end of 2019.

A substantial amount of Hungary’s electricity, up to 40 percent, is produced with Russian specialists’ help at the Paks Nuclear Power Plant. Rosatom is preparing for implementation a comprehensive programme for modernising the power plant and building two new power units using the latest Russian technology. Bringing these two new units on line will double electricity production and bolster substantially Hungary’s energy independence. It will also create thousands of new jobs and give a boost to the country’s overall economic development.

Our countries want to intensify bilateral scientific, education and humanitarian contacts. The Russian-Hungarian Commission for Science and Technology Cooperation will resume work. We plan to expand student exchanges. During the last academic year, 120 scholarships were given to Hungarian students for free study in Russian universities.

Russia continues to assist Hungary in training qualified teachers specialised in Russian, and thus helps to maintain the traditionally high level of interest in studying the Russian language.

Last year, our countries held successful reciprocal culture days, during which several dozen exhibitions, concerts and other events took place. We will continue doing all we can to encourage our peoples’ mutual interest in studying each other’s history, culture and traditions.

Interregional contacts and ties play a big part in developing our bilateral relations. Delegations from big Russian regions will make a series of visits to Hungary in the near future. Mr Orban and I took the initiative of setting up a special intergovernmental commission that will soon start work and will provide practical support to regions in carrying out their projects and initiatives.

During today’s talks, we exchanged views on current issues on the international agenda, including the situation in the Middle East and North Africa and the related immigrant crisis.

We think that to solve the refugee problem, we first need to achieve political settlement of the conflicts in Syria, Libya and other countries where war and chaos have forced people to flee their homes. We need to work together to fight terrorism and help the entire Middle East region return to normal life.

We discussed the prospects for renewing full-fledged dialogue between Russia and the European Union. We value the efforts the Hungarian government and Mr Orban have made in this direction.

In conclusion, I want to thank once more the Hungarian Prime Minister and all of our Hungarian colleagues and friends for these substantial and useful talks. I am sure that will help to boost our bilateral cooperation in all areas.

Question: I have a question for the President and the Prime Minister. You said that you spoke about the situation with refugees from the Middle East coming to Europe. We know that Hungary has its view on this issue. Do Russia and Hungary share the same view on the causes of this crisis and possible solutions?

Vladimir Putin: We expressed our views on the causes of this crisis. I think that our views do largely coincide. But the refugee issue is the EU’s internal affair. We do not interfere in such matters.

We know that discussion on this issue is taking place inside the European Union. Our people has sympathy for the position taken by the Hungarian government and Prime Minister, the desire to defend European identity and Hungary’s national identity.

Regarding many other aspects related to political settlement in the Middle East, carrying out military operations and so on, the Prime Minister follows the line formulated by the European Union, and we understand this.

If you allow, I will talk about our position and add a couple words.

The reason for today’s problem with migrants lies in the destabilisation of states and whole regions of the world – North Africa, Afghanistan and other nations. And in order to resolve the migration problem, we need to eliminate the root cause of this – we need to restore statehood, the economy and the social sphere in these states, so that people can live in their own nation or return home. We need to create all the necessary conditions for this. But to do this, we need, first and foremost, to eliminate terrorists. This is our number one challenge.

Question: Hello. During the talks, you spoke of the European Union’s economic sanctions against Russia. Do you expect the situation to improve in the near future? If so, what form will this improvement take?

Vladimir Putin: This is probably more a question to the Prime Minister and other European leaders. As you know, we have only implemented retaliatory measures responding to the sanctions that were unilaterally imposed by the EU against Russia, and their removal depends on the EU, not us. We heard today and in the past that all this depends, first and foremost, on the fulfilment of the Minsk Agreements between the conflicting sides in Ukraine, that were supported by Russia, France and Germany in the Normandy Format, but it seems to me that any objective observer will see today that the ball is in the court of the Ukrainian authorities. It is they who must, first and foremost, fulfil the provisions of the Minsk Agreements.

As you recall, the key here is political settlement, creating the political conditions, the most important of which is amending the Ukrainian Constitution, which is clearly set in the Minsk Agreements: it states in black and white that the Ukrainian side must make amendments to its Constitution by the end of 2015. As we can see, this has not been done.

There are other considerations related to preparing and holding local elections, with implementation of the already adopted law on special status for corresponding regions in Ukraine. Unfortunately, all of this remains unresolved. But this does not depend on Russia alone, and depends less on Russia right now than our partners in Kiev. We will hope that the turbulent political processes there will be overcome and the political forces in Ukraine that truly favour settling this problem will be able to find the strength, to find allies to bring this process to an end.

Today, it is pointless to associate the elimination of sanctions against EU nations with the final decision to bring the Minsk process to a logical conclusion, because, again, this ball is not in Russia’s court. We regard this process calmly. We are confident that the relations between Russia and the European Union will sooner or later normalise.