Interview by Alexander Krestiyanov, Deputy Permanent Representative of Russia to the EU for Reuters 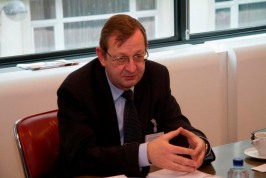 On 15 May 2013 Alexander Krestiyanov, Deputy Permanent Representative of Russia to the EU gave the Reuters news agency an interview on Russia-EU energy cooperation. He was asked about the state of affairs in this area, Gazprom activities on the European market, possible impact of shale gas development, prospects for diversification of energy routes from Russia to the EU and the Asian-Pacific region (APR), and on implementation of energy infrastructure projects of international dimension.

Alexander Krestiyanov gave, on the whole, a positive evaluation of the Russia-EU cooperation, including in the sphere of energy. At the same time, he noted that progressive development of economic cooperation between the two sides does not at all prevent them from having divergencies in their relations.

The Russian Gazprom, it was stated, remains a reliable supplier of “the blue fuel” to the EU. It provides EU member states with natural gas at prices and on terms which are determined by market base. Different gas prices in EU member states are caused by specific features of each regional market, as there is no world market for natural gas, while the creation of a single EU energy market has not yet been completed. It would be at least unfair to blame a private company, like Gazprom, for deficiencies of the EU itself in the development of a single energy market. In this context, the Russian side will continue to closely monitor the situation with the investigation initiated by the European Commission against Gazprom, to prevent any politisation of the case. The hope was expressed that the European Commission will demonstrate professional approach to the investigation and will resist the temptation to replace the market approach to pricing by purely administrative pressure on the Russian company.

Alexander Krestiyanov noted that EU dependency on Russian gas supplies is grossly overestimated, as in reality it accounts for not more than 6 per cent of the total EU energy mix.

Speaking of the so-called “shale gas revolution” in the US, Alexander Krestiyanov said its first impact on Europe was increased difficulty in implementation by the EU of its own goal to reduce the green-house gas emissions. The shale gas came to replace in the US the environmentally unfriendly coal which is now being exported to the EU at knock-down prices and is already used in a number of countries (mainly in Germany) as a substitute to gas to produce electricity. Further impacts of the “shale gas revolution”, including those influencing the level of competitiveness of the US and EU industry, will become tangible in the future.

Alexander Krestiyanov informed Reuters on implementation of specific energy infrastructure projects. He noted, in particular, that Russia seeks to ensure the security of gas transports to Northern and Central Europe through diversification of supply routes and the launch of the North Stream gas pipeline system. In the South, the South Stream should serve the same goal; its construction started in late 2012 and should be completed in 2015. At the same time, the Russian side does not consider the EU Southern Corridor projects (such as the Trans-Anatolian gas pipeline, the Trans-Adriatic gas pipeline, Nabucco and others) as competing or mutually exclusive.

Alexander Krestiyanov said the Russian side has adopted a decision to geographically diversify its gas exports. The markets of a number of APR countries, such as China, Japan and South Korea are considered to be prospective. Gas exports to the APR have already begun and are progressively growing. This, however, should not be seen as a threat to gas supplies to Europe.

Answering the question on Russia’s attitude to the Trans-Caspian gas pipeline project, Alexander Krestiyanov stressed the need to take into account the legal status of the Caspian Sea, and the fact that it is an inland basin with high seismic activity and tectonics of the seabed. Implementation of such a large-scale project as the Trans-Caspian pipeline will inevitably pose a serious threat to the environment and the population of coastal states.

The role of Ukraine in pan-European processes was addressed. Alexander Krestiyanov outlined the Russian understanding of advantages the country would gain from integration into the Customs Union of Russia, Belarus and Kazakhstan, to whose economies that of Ukraine is closely linked.