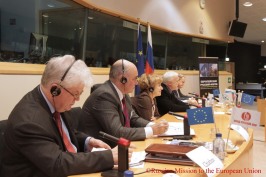 The fourth European Russian Forum “EU and Russia: the Human Factor of the Partnership for Modernization” organized by Latvian Member of the European Parliament Tatjana Zdanoka (political group “Greens/European Free Alliance”) with support of the Ministry of Foreign Affairs of the Russian Federation, “Russkiy Mir” foundation and the Permanent Mission of the Russian Federation to the EU was held in Brussels on 29-30 November 2010. Mr. Grigory Karasin, Secretary of State, Deputy Minister of Foreign affairs, Mr. Vladimir Chizhov, Permanent Representative of the Russian Federation to the EU, Mr. Alexander Chepurin, Director of the MFA’s Department on work with compatriots abroad, Mr. Konstantin Zatulin and Ms Kira Lukyanova, members of the State Duma, Mr.Vladimir Platonov, President of the Moscow City Duma as well as political scientists Ms Natalia Narochnickaya and Mr. Viacheslav Nikonov, members of the European Parliament took part in the event.

The work of the forum was focused on the “Partnership for modernization”, necessity to build a Russia-EU common space, including through the abolition of visas, elimination of other obstacles for mutual integration and on the contribution of compatriots to these processes.

A commemorative award of the European Russian Alliance was presented to Mr. Grigory Karasin for support of compatriots living abroad.