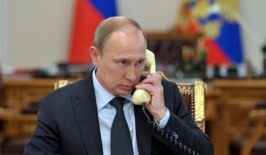 President of Russia Vladimir Putin had a telephone conversation with Federal Chancellor of Germany Angela Merkel and President of France Francois Hollande.

The three leaders discussed the internal Ukrainian crisis and the possibility of implementing the Minsk agreements by coordinating political and security measures. They focused on the importance of formalising the special status for Donbass, implementing a constitutional reform and amnesty, as well as holding local elections. All these issues should be coordinated within the Contact Group, where Kiev can talk directly with Donetsk and Lugansk.

The leaders also expressed concern over persisting instability at the contact line and numerous ceasefire violations and pointed to the need for strict compliance with the ceasefire agreement, the withdrawal of heavy weapons under the OSCE Special Monitoring Mission’s control and the adoption of measures to further de-escalate tensions, including by disengaging the armed groups and creating demilitarised zones.

President of Russia Vladimir Putin updated his colleagues on the crude provocation by Ukraine, which sent a group of subversives in early August to stage terrorist attacks in Russia. Kiev’s use of such forceful measures is directly harming the Minsk process and cooperation within the Normandy format.

The three leaders agreed to continue personal contacts on the Ukrainian issue, in particular, to meet on the sidelines of the upcoming G20 summit in China on September 4–5.