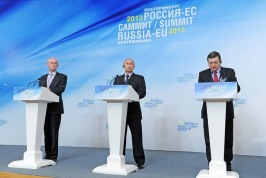 The talks held at the 31st EU-Russia Summit were constructive and meaningful. We examined in detail the current issues of cooperation in trade, the economy and humanitarian sphere, as well as the improvement of the legal framework for our relations.

Russia and the European Union are close partners. Europe is the largest investor in the Russian economy: accumulated investments amount to $277 billion, of which over $105 billion are direct investments.

In turn, Russian companies have invested $77.5 billion in the economies of EU countries, including $52 billion in direct investments. That is 60% of our current foreign investments.

The EU accounts for nearly 50% of Russia’s foreign trade – 49%, to be precise. Last year, despite the challenges in the global and European economy, trade continued to grow: it rose by 4.1% and exceeded $410 billion. I am confident that we will reach the milestone of $500 billion in the foreseeable future.

We discussed the additional reserves that could be used to increase the flow of goods, services and capital. We should continue our active efforts to abolish the remaining administrative and technical customs barriers, implement joint projects in industry, agriculture and the financial sphere.

Naturally, we reviewed the preparation of the new EU-Russia agreement. This document must reflect the changing international situation and the Eurasian integration processes. We believe that it would be useful for the European Commission’s leadership to establish direct contacts with the inter-state structure of the Customs Union, Common Economic Space and the Eurasian Economic Commission. Close cooperation between the two commissions would be particularly relevant with regard to the decisions on further integration adopted recently at a meeting of the Supreme Eurasian Economic Council in Astana, Kazakhstan.

We also went over the mutual grievances in trade – we couldn’t get around that. Such a huge volume of trade means that there are always some reciprocal problems; that is only natural. The nature of these grievances is well known: disposal fees, anti-dumping measures, sanitary and phytosanitary standards, and so on. We have agreed to work constructively together to reach compromise solutions. I am sure that this is possible.

Traditionally, energy has had an important place in our negotiations. In March, we signed the Roadmap for Russia-EU Energy Cooperation until 2050. This document states a strategic goal: to create a single European energy sector. Naturally, there are some outstanding issues here. I will not go into detail about them now since they are also widely known, but we are in contact and will continue to seek acceptable solutions.

We also discussed security and countering new challenges. One important outcome is that we have signed an Agreement on Drug Precursors. It will undoubtedly strengthen cooperation between anti-drug agencies of the Russian Federation and the European Union.

During the exchange of views on topical international issues, we paid close attention to Syria. We reiterated Russia’s position that any attempt to influence the situation by force, through direct military intervention, is doomed to failure and will inevitably lead to severe humanitarian consequences.

We have also stated our view on the decision to lift the arms embargo on the Syrian opposition, which was adopted last week by the EU Foreign Ministers. I will not deny that we were disappointed by it. We have agreed to coordinate more closely our efforts to promote Geneva 2 as part of our work on other acute international problems.

In conclusion, I want to thank our European friends for a very useful, open and constructive exchange of views, and for their cooperation today. Thank you very much.