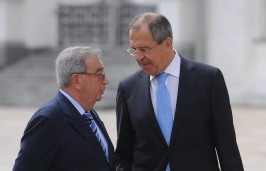 Of special importance for us diplomats was the period in Yevgeny Primakov’s life when he was our foreign minister. His appointment to Smolenskaya Square marked a turning point in the country’s foreign policy when conditions were created for the restoration of Russia’s international standing. Primakov knew better than many others that its unique geographical location and centuries-long history, as well as its huge potential and its status as a permanent member of the UN Security Council, predetermined its independent and multi-directional foreign policy.

His vision of trilateral interaction in the Russia-India-China format, which these three countries are still widely using, paved the way to the subsequent creation of the BRICS group, which has since become an integral part and a key pillar of the rising multipolar world.

Yevgeny Primakov was never on the side of confrontation. His famous U-turn over the Atlantic was not an attempt to increase tension in the world but a reminder that dialogue with Russia is only possible on equal terms and that international relations must be based on international law. Primakov knew that diplomacy cannot succeed without personal contacts and used his intellect, knowledge and talent for open communication based on mutual respect to develop good relations with the overwhelming majority of his foreign colleagues.

Primakov’s work style deserves special mention and, I am sure, will become the yardstick for many generations of Russian diplomats. Despite a busy schedule, Primakov never lost sight of the smallest details of international developments, going deep into the most complicated and controversial issues he had to deal with. He demanded the same approach from his subordinates. He detested cliché solutions and superficial and ill-considered opinions and views.

He rallied our team and directed our efforts towards finding effective solutions to the large-scale problems that were facing Russia. I remember that in May 1998 a large group of foreign ministry personnel, including Yevgeny Primakov, were awarded prestigious state decorations for their contribution to Russia’s foreign policy. I was in that group; at that time, I worked as Russia’s Permanent Representative to the UN. We posed for a photograph after receiving the decorations. Yevgeny Primakov was in the centre, smiling his wise and open smile. This photograph is one of my favourites. It stands on my office desk in Smolenskaya Square.

Many foreign politicians respected Primakov’s position of principle. Henry Kissinger spoke about this at a dinner party given by the Israeli Ambassador in New York in January 1996. When one of those present asked the patriarch of American diplomacy what he thought about Primakov’s appointment, considering that his predecessor suited the West very well while the new minister holds completely different views, Kissinger replied that he always preferred working with people who had a clear vision of their national interests.