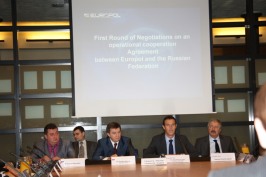 The first round of talks on an operational cooperation agreement between Russia and Europol was held in The Hague on 21-22 October 2010. Opening the negotiations, Mr. S.Bulavin, Secretary of State – Deputy Minister of Interior of the Russian Federation, and Mr. R.Wainwright, Director of Europol, both stressed that the new agreement is intended to raise Russia-Europol law-enforcement cooperation to a qualitatively higher level.

It has become evident for both parties that the scope of the existing Russia-Europol Cooperation Agreement signed on 6 November 2003 is already too narrow and it is high time to move towards closer cooperation in combating transnational crime. The new agreement is precisely aimed at transforming law enforcement cooperation in order to make it more practical. It will open up more opportunities for information exchange between Russian law enforcement bodies, on the one side, and Europol and partners from EU Member States, on the other. It will enable them to coordinate their activities and conduct joint operations for preventing, detecting and investigating transborder crimes.