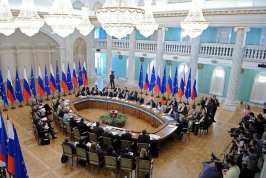 Particular attention was paid to the work on the new basic agreement between Russia and the European Union with due consideration of the evolving Eurasian integration process.

The meeting participants also discussed cooperation in energy and security, as well as joint efforts to combat drug trafficking. An Agreement on Drug Precursors was signed on the summit’s sidelines, aimed at strengthening cooperation between anti-drug agencies.

The international issues discussed included the situation in Syria.

Addresses at the working session of the Russia-EU summit