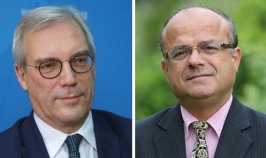 A detailed discussion focused on the current situation in and prospects of relations between Russia and the European Union. Both parties stressed the importance of maintaining dialogue on issues of mutual interest against the background of increasing challenges to global stability.

The parties exchanged views on a range of topical issues on the international agenda, including the future of Joint Comprehensive Plan of Action on the Iranian nuclear programme, settlement of problems on the Korean peninsula, situation in the regions of Western Balkans, Middle East and Ukraine.