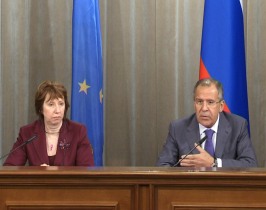 On 17 November 2011 Moscow hosted a meeting of Russia-EU Permanent Partnership Council at Foreign Ministers level with the participation of Russian Foreign Minister Sergey Lavrov and EU High Representative for Foreign Affairs and Security Policy/Vice-President of the European Commission Catherine Ashton.

The Parties had a detailed discussion on the current state and prospects of further developing Russia-EU relations within the scope of the four “Roadmaps”, including preparation for the forthcoming Russia-EU summit in December in Brussels. Special attention was focused on issues of progress towards a visa-free travel regime for Russian and EU citizens, Russia’s accession to the WTO, implementation of the “Partnership for Modernisation” initiative, enhancement of mechanisms of political dialogue as well as cooperation in the field of crisis management.

The meeting also embraced an exchange of views on a range of topical international issues, including the Middle East peace settlement and situations in Libya, Syria and Kosovo.