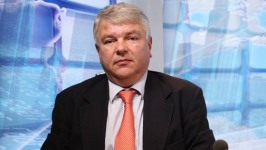 It has been a year since the tragic events started to unfold in Ukraine. The country's crisis provoked by the West highlighted the fundamental differences on how to build modern Europe. Our central disagreement concerns ways and methods of developing international relations, at a time when the basic principles of democracy are essentially undermined for the sake of politics of the moment, and when the guiding principle is to make all countries adopt a single Western model by any means. To these ends, almost any means available are being used, including direct military intervention, supporting coups d'état, imposing economic and political sanctions, etc. The European community once again faces the choice of following the path of the Helsinki principles towards a prosperous and united Europe or resorting to pointless confrontation that would have a negative impact both on states and ordinary people of our continent.

Unfortunately, the latter approach is currently prevailing. A vivid illustration to that is Ukraine, where direct support to another coup d'état was provided, which in itself undermines the Charter of Paris for a New Europe and the Helsinki Final Act of the Conference on Security and Cooperation in Europe. In fact, an artificial geopolitical dilemma was imposed on Ukraine: "either Russia or Europe". For this purpose, a large scale campaign was launched, which included propaganda, economic pressure and, sometimes, direct interference in the internal affairs of the country. When Kiev decided only to postpone the signing of a European Union Association Agreement, the West, in fact, supported extremist forces in Ukraine and thus largely predetermined the armed seizure of power in the country that happened in February. That explains our partners' condescending attitude to violations of human rights and democratic principles by the new Kiev authorities, as well as to the mass slaughter that took place first in Odessa and Mariupol, and later in the East of Ukraine. These actions of the West caused serious damage to the architecture of interaction between Russia and EU, which took a lot of our common efforts to build over the last two decades.
Against this background, the introduction of unilateral individual and sectoral trade and economic sanctions against Russia looks absolutely inconsistent, although we have repeatedly made it clear to the EU that at a time of increased interdependence it is a road to nowhere. It is the EU, not Russia, who has used economic "weapons", inter alia in the energy sector, for political purposes.

European officials estimate economic losses for the EU caused by the sanctions at 40 billion euros this year, and 50 billion euros over the next year. Due to the politically motivated restrictive measures, many European companies that have gained an excellent reputation in our country are now forced to either incur losses or to give away to competitors their positions on the Russian market, that were tried and tested over the years.

It is obvious who is the beneficiary in a situation that weakens both Russia and the EU and receives political and economic dividends as a result of the implementation of the principle of divide et impera. One gets the impression that someone overseas did not like the dynamic development of our bilateral relations and the sanctions regime became nothing more than an attempt to return to the schemes of the Cold War times and containment methods against Russia.

Have we been meticulously weaving, year by year, decade by decade, the fabric of our trade and investment cooperation – considered, inter alia, as a political safety net – only to sacrifice everything to the politics of the moment and dubious geopolitical projects at the most critical moment?

The path of confrontation that the "hawks" of the EU and US political elites have followed is a blind alley. Despite the aggressive disinformation campaign targeting European population, including media coverage, concealment of hard facts and creation of parallel reality regarding the situation in Ukraine, public opinion in a number of the EU States does not support the sanctions either, notably in Greece, Italy, France and some other countries.

We hope that common sense will prevail in the European Union to mobilize the forces that recognize their full responsibility for keeping and strengthening peace on the continent which our fathers and grandfathers established through terrible pain. Clearly, this will require renouncement of the flawed logic of sanctions, as well as the tactics of a zero-sum game, a relic of the Cold War past. Our cooperation should be built on the principles of equality of rights and balance of interests.

In this context, in our viewpoint, support of the “Helsinki+40” process designed to establish a "common and indivisible security community stretching from Vancouver to Vladivostok" is an important area of work. OSCE's upcoming 40th anniversary opens up an opportunity to seriously consider upgrading the common European security system and launching the "second phase of the Helsinki process". Specifically, this phase should aim at reaffirming the fundamental principles of the Helsinki Final Act and the Charter for European Security; striking a balance between nations' right to self-determination and territorial integrity of States; establishing common principles of non-interference into domestic affairs of sovereign States, inadmissibility of anti-constitutional coups d'état and of support to extremist forces; as well as finding solutions to a number of other problems.

According to our observations, when the new leadership of the European Commission took over, European institutions gradually started to realize the importance of maintaining partnership with Russia. After an artificial pause, there are signs of a certain renewal of the political dialogue between Russia and the EU at the highest level. On the sidelines of the G20 Summit in Brisbane, Vladimir Putin met with Jean-Claude Junker, the new President of the European Commission. On 4 December 2014 in Basel, in the framework of the OSCE Ministerial Council, Russian Foreign Minister Sergey Lavrov had a focused discussion with the EU High Representative for Foreign Affairs and Security Policy, Federica Mogherini.

We should draw lessons from the current crisis. Developments in Ukraine have vividly demonstrated that we bear joint responsibility for the situation in Europe and that there are systemic challenges in the area of security and cooperation. Russia and the EU are the two leading centres of power and economic development in Europe, and we are largely interdependent. It is time to abandon the logic of containment with all the related military and political costs. If we do not agree upon a model of a mutually beneficial partnership which would be acceptable to all, we will inevitably be facing crises similar to the Ukrainian one, over and over again.

That is why we believe that the proposal by Russian President Vladimir Putin to create a common economic and humanitarian space that would stretch from Lisbon to Vladivostok is gaining more clout. It could be based on a free trade zone between the European Union and Eurasian Economic Union (EAEU). Starting from January 1, 2015, the EAEU will become reality, and ignoring this fact would be politically short-sighted. Europeans seem to gradually begin to understand this. The main thing at the time of creating such a space is to take into account and respect each other's interests.

We would like to see the European continent a unified space with clear and unambiguous rules, where every resident could move freely and international law would be applied as a whole, not by cherry-picking some of its principles out of context. From this point of view, "New Europe", the name of your newspaper, is quite symbolic, and indeed it is time to stop generating confrontation and think about the future we would like to live in.