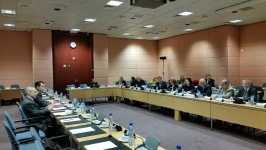 Mr. Alexandr Botsan-Kharchenko, Director of the 4th European Department of the Ministry of Foreign Affairs, led the Russian delegation. The EU was represented by Ms Angelina Eichhorst, Director for Western Europe, Western Balkans and Turkey of the European External Action Service, and Mr. Henrik Markuš, Director of the Department for the South-Eastern Europe and Turkey of the Ministry of Foreign Affairs of Slovakia.

A detailed and constructive discussion was held on a broad range of issues, in particular in the light of bilateral cooperation of the candidates and potential candidates for EU membership with Russia. An interested exchange of views took place on the challenges and threats affecting the region, including the migration crisis.

An understanding was confirmed to hold the next round of the COWEB / COELA consultations in the first half of 2017.