Reception on the occasion of the Day of the Russian Diplomat 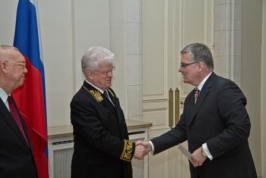 On 10 February a reception on the occasion of the Day of the Russian Diplomat was given at the Permanent Mission of Russia to the EU. Among the guests were Mr. Elmar Brok, Chairman of the European Parliament Committee on Foreign Affairs, Mr. Vincent Degert, EEAS Head of Russian Unit, Mr. Brigadier General Pascal Roux, Director at the EU Military Staff, Mr. Jacek Bylica, EU Special Envoy for Non-proliferation and Disarmament, MPs, as well as EEAS and European Commission officials.

In the course of the event guests were able to get acquainted with the milestones in the history of the Russian diplomatic service and expand their knowledge of prominent Russian diplomats. A lot of attention was also paid to the photo exposition devoted to the Opening Ceremony of XXII Winter Olympic Games in Sochi held on 7 February.