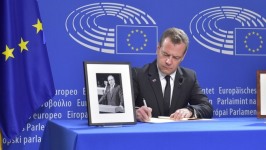 Helmut Kohl was a man of magnitude in every sense of this word, a man of big ideas and big plans. He was one of the leaders who make epochs change. A great deal of what he managed to achieve in 16 years as Chancellor had been deemed impossible by his contemporaries. Today we say: “It was impossible to do it any other way.” This means he was able to choose the only correct way for history to follow. In this sense Helmut Kohl was truly a man of the future.

He opened the era of unity for the German people. A whole new generation has grown up in this new Germany. Back then, as my colleagues speaking before me said, not everyone accepted it. But Helmut Kohl knew very well what war is. He witnessed it as a teenager and devoted many years of his life to help build Europe that was not divided in any way: neither by trench lines, nor by borders or warring ideologies. Helmut Kohl, the great politician, was well aware that he could reunite his own country only by overcoming the split within Europe.

My country, Russia, was always a reliable partner to him on this road. Our nations had and have a particularly deep understanding of the dangers of confrontation and the value of peace. This allowed yesterday’s foes to start building relations based on mutual respect, equality and trust. Helmut Kohl personally did a great deal for our relations to become the best they have ever been in history. And Russia greatly appreciates this.

Helmut Kohl succeeded in the most important achievement of his life. He was always a real national leader yet he thought and acted in the common European and global context. He dreamed not only of a unified Germany but also of a united Europe. And he saw Russia as its inalienable part.

It was a dream of a common home devoid of barbed wire, fear and hostility that used to divide the continent. A dream of peace and security for all. When an individual, his or her ideas, and, of course, shared values, cooperation and trust are placed above nations, above borders and states.

It is impossible to put a full stop in the construction of such a common home, impossible to say that everything has finally been done ideally well. This requires everyday efforts from all.

The Berlin Wall has long been taken apart and made into souvenirs. But its ideological fragments are sill scattered around the world. We must admit that due to our contradictions we are still far from realising the dream of a common home.

Nevertheless, the united, safe and prosperous Europe remains our shared goal. Helmut Kohl proved in much harder times than today that this goal is attainable. Today’s leaders have the responsibility of being true followers of his efforts.

Ladies and gentlemen, the life and work of the German Unity Chancellor evoke respect around the world and will continue to do so. In Russia he will be remembered as our friend, a wise and insightful politician, a very open and sincere person. Allow me once again to express on behalf of the Russian Federation the most heartfelt condolences over the passing of Germany’s great son, Helmut Kohl.