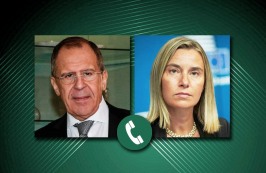 On October 12, Foreign Minister Sergey Lavrov spoke by phone with High Representative of the European Union for Foreign Affairs and Security Policy and Vice-President of the European Commission Federica Mogherini, at her initiative.

The officials discussed problems facing the Syrian settlement and developments in other countries of the region, in particular, Yemen and Iraq.