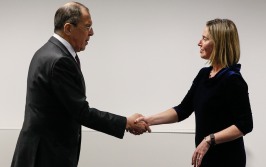 On December 8, Foreign Minister Sergey Lavrov met with Federica Mogherini, High Representative of the European Union for Foreign Affairs and Security Policy and Vice-President of the European Commission, on the sidelines of the OSCE Ministerial Council Meeting in Hamburg.

The officials discussed topical issues of Russian-EU relations, the developments in Syria with the emphasis on the humanitarian situation in that country and prospects for a political process, and also the issues of settling the crisis in southeastern Ukraine.