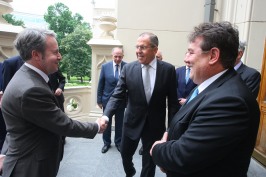 On July 19, Foreign Minister Sergey Lavrov, as per tradition, met in Moscow with the ambassadors of the EU member countries and the head of the EU delegation to the Russian Federation.

Having noted Russia’s striving to restore cooperation with the EU, Mr Lavrov emphasised the absurdity of the EU’s attempts to link normalisation of relations with Russia with full implementation of the Minsk Agreements. Mr Lavrov urged the EU to actively facilitate the full and unconditional implementation of Kiev’s commitments.

The sides also discussed the developments in Libya and Afghanistan, as well as other topical international issues.