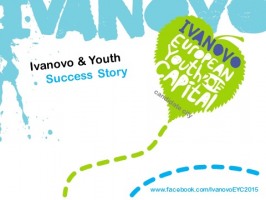 The city of Ivanovo, participating in the contest “European Youth Capital – 2015”, was presented in Brussels on 17 October 2012. This event was held in the Representation of Lower Saxony in Brussels with active support of the Permanent Mission of the Russian Federation to the EU. Deputy head of Government of Ivanovo region Mr. M.Poliakov, mayor of Ivanovo Mr. V.Sverchkov as well as head of programme committee promoting Ivanovo as candidate city Mr. D.Maslov took part in the presentation which attracted numerous representatives of the European Parliament, different DGs of the European Commission, Council of Europe, youth organizations.

The “European Youth Capital” is the title awarded to a city of a Council of Europe member-state for the period of one year. Having received this title, the city can promote new ideas, innovative projects with participation of the youth, becomes a model for further development for other European cities.

13 cities participate in the contest in 2012. Ivanovo’s rivals in the final stage are Cluj-Napoca (Romania), Varna (Bulgaria) and Vilnius (Lithuania). The winner will be announced in November.