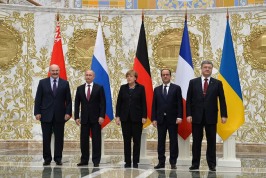 Vladimir Putin, Angela Merkel, Francois Hollande and Petro Poroshenko took part in the talks on a settlement to the situation in Ukraine. At the final stage, they were joined by Heidi Tagliavini, OSCE Special Representative to the Trilateral Contact Group on the Ukrainian Settlement.

Following the Normandy format talks, the leaders of Russia, Ukraine, France and Germany adopted a declaration in support of the Measures to Implement the Minsk Agreements adopted on February 12 by the Contact Group on the Ukrainian Settlement.

Vladimir Putin also made a statement for the press.

We proceed from the notion that all the parties will show restraint until the complete ceasefire. The problem here was that representatives of the Donetsk and Lugansk people’s republics claimed that in response to the aggressive actions of the Kiev authorities they not only held back the Kiev forces but also managed to mount an offensive and surrounded a group of 6,000 to 8,000 servicemen. They, of course, proceed from the idea that this group will lay down arms and stop its resistance.

We nevertheless call on both sides to show restraint and in order to avoid unnecessary excessive bloodshed and casualties they should do everything possible to ensure that the separation of forces, mainly the heavy equipment, is conducted without unnecessary bloodshed.

Representatives of the Ukrainian authorities believe their troops have not been surrounded and therefore think this process will go sufficiently smoothly. I had some initial doubts that I can share with you. If the troops really had been surrounded, then, logically, they will try to break free, while those who are on the outside will try to arrange for a corridor for their trapped servicemen.

Eventually, we agreed with President Poroshenko that we will instruct our experts – I am ready to do so – to establish what is actually going on there. In addition, I will repeat, we will try to develop a set of measures to verify the implementation of our decisions by both sides.

I would like to call on both conflicting parties once again to stop the bloodshed as soon as possible and proceed to a truly political process of a long-term settlement.

(Answering a question from a Russian journalist)

One document has just been signed by the Minsk Contact Group, it is called Measures to Implement the Minsk Agreements.

The other document does not require signing: it is a statement by the President of France, the President of Ukraine, yours truly and the Federal Chancellor of Germany to the effect that we support the process.