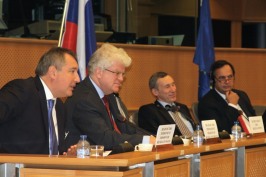 The discussion focused on the role of NATO, EU and Russian in maintaining security, on the initiative of Russian President Dmitry Medvedev on a European Security Treaty and on reform of the OSCE.

In his presentation Ambassador Chizhov emphasized the vitality of the Russian initiative to develop a European Security Treaty aimed at turning an equal indivisible and assured security for all states from a slogan into reality. He stressed the important role of parliamentary diplomacy in building an efficient and reliable security system in the Euro-Atlantic region and the whole world.

Preparations for PCC meeting in Strasbourg on 14-15 December 2010 were also discusses, the plan of PCC activities in 2011 was outlined.