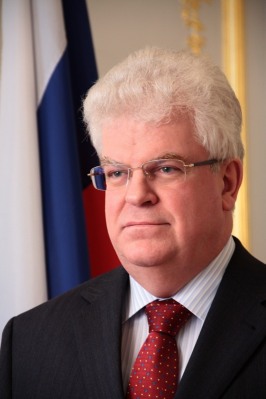 Question: Russian President Putin gave today a wide-ranging press conference on the situation around Ukraine. Perhaps we could go into details of things he said. Let’s start with the sanctions which the EU may adopt against Russia. President Putin said that sanctions could hit back at those who impose them, and warned that they should “think about it”. Is this some sort of threat?

Ambassador Vladimir Chizhov: Of course it’s not a threat, rather a piece of friendly advice. If we speak about trade and economic ties, it’s always a two-way street. And partners that are so closely interlinked and interdependent as Russia and the EU, certainly rely on each other on many issues. Our trade turnover, I’ll give a very simple figure, is one billion euros a day. And that is a figure that is worth considering before taking any restrictive measures.
On certain possible measures that were announced at the [EU] Foreign Affairs Council yesterday, they do not appear to be overly impressive. I would even add that they are more restrained that the political rhetoric that surrounded them.

Question: You refer to freezing the visa dialogue? As Russians have not got visa free regime, such a freeze means nothing, is this what you mean?

Ambassador Vladimir Chizhov: Yes, because the process is already frozen by the EU. Because it’s not going anywhere. On the New [basic bilateral] agreement there is a similar situation. The ball is squarely in the EU court. Before the last [EU-Russia] summit we had in January we suggested that we should re-invigorate the process, and use the summit to provide political impetus to those negotiations, but the EU chose to postpone it to the next summit in June. So we’ll see what the European Council comes out with on Thursday.

Question: But what if G8 becomes G7? Wouldn’t this be a blow to Russia?

Ambassador Vladimir Chizhov: Well, the G8 will not become G7, it would fade away and fizzle out. Because actually it’s been overtaken to a great extent by the G20, as far as economic issues are concerned. On the political side: you know, chairing the G8 is not a privilege, it’s not a gift given to Russia. It’s a huge burden of responsibility. And every presidency of the G8 has to organise hundreds of meetings, apart from the summit. If there is a pause in that work, that would only increase the tension in further work on preparing the summit and beyond. And you know, for Russia, I will tell you my personal view, what happens in Ukraine is more important than what happens with the G8 summit.