Hearings in the Foreign Affairs Committee of the European Parliament 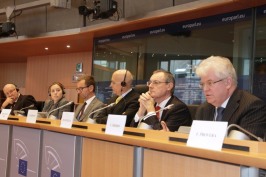 An exchange of views devoted to negotiations on the New Russia-EU Agreement in which Ambassador Vladimir Chizhov, Permanent Representative of the Russian Federation to the EU, and head of the Russian negotiations team, took part was held in the Foreign Affairs Committee of the European Parliament on 26 January 2011. David O’Sullivan, Chief Operating Officer of the European External Action Service and Chief EU negotiator, participated in the event from the EU side.

Ambassador Chizhov gave a presentation on the history and current state of negotiations. He particularly noted that in preparation of the agreement priority is being given to the quality of the document and not to its finalization by a specific artificially established date. Negotiations are an inevitably lengthy and difficult process which shall result in a thoroughly prepared, comprehensive and balanced document. It is envisaged that sectoral agreements could be elaborated as a follow-up.

Members of the European Parliament asked a number of questions on the course of negotiations and general state of Russia-EU relations, including on Russia-EU cooperation in addressing global and regional problems (Iranian nuclear programme, ABM, terrorism, local conflicts), on Russia-EU energy cooperation, Russian accession to the WTO, the state of play in the visa-free dialogue, situation with human rights in Russia and the EU. Ambassador Chizhov provided comprehensive answers to them.

The issue of “Partnership for Modernisation” was discussed in detail. Ambassador Chizhov noted that this initiative is called to create an innovative mechanism of Russia-EU cooperation, including, in perspective, in the context of implementation of the future agreement. The partnership is a two-way process intended to promote the development of both Russia and the EU on a mutually beneficial basis in spheres where they can share their experience and potential.

As a whole it was stressed at the hearings that Russia-EU relations have a strategic character, and both sides are equally interested in their progressive development.