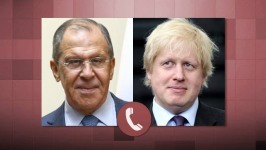 Foreign Minister Sergey Lavrov had a telephone conversation with British Secretary of State for Foreign and Commonwealth Affairs Boris Johnson on August 11 on the initiative of the British side.

The Russian Foreign Minister congratulated Boris Johnson on his appointment. Both sides expressed the hope for normalising Russian-British relations, underlined their readiness to step up the political dialogue despite the remaining issues in bilateral relations in a bid to realise their considerable potential, including in the economy, humanitarian sphere and foreign policy.

The officials also discussed pressing issues pertaining to the fight against terrorism and the situation around Syria.