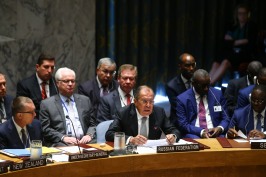 The region of the Middle East and North Africa is clearly experiencing a period of serious upheavals linked to the aggravation of interethnic and interfaith antagonisms and an unprecedented surge of terrorism and extremism. Iraq, Yemen, Libya and Syria are on fire. There is trouble in a number of other countries, including on the African continent. Any further deterioration of the situation is a grave threat to international stability and security. It has been repeatedly noted that this state of affairs is the direct consequence of a terrible practice of geopolitical engineering, interference in internal affairs of sovereign states, and attempts to change undesirable regimes, including by force.

The situation in Syria is justifiably evoking special concern. From the very beginning of the Syrian crisis, Russia has invariably advocated its strictly peaceful solution respecting the sovereignty, unity and territorial integrity of that ancient country. As before, we are confident that there is no alternative to a political process based on a mutually respectful and inclusive intra-Syrian dialogue without preconditions, accompanied by a parallel effort to ensure cessation of hostilities, expand humanitarian access, and increase the effectiveness of combating terrorism. It is this comprehensive stance that has been enshrined in resolutions approved by the International Syria Support Group (ISSG) and in UN Security Council resolutions, primarily Resolution 2254. To implement requirements contained therein, Russia and the United States as the ISSG co-chairs worked for over six months to coordinate concrete agreements, a process that was completed on September 9, three days after the meeting in China between Russian President Vladimir Putin and US President Barack Obama, who finally coordinated the last points of principle that needed to be brought up to the mark. I apologise for referring to documents which practically no one in this room has seen. Russia is still ready to make them public and to circulate them within the United Nations.

I would like to particularly stress that the Russian-US agreements specify that the main priority is to separate the opposition groups from ISIS and the Jabhat al-Nusra terrorists in order to strengthen the cessation of hostilities regime, resolve humanitarian issues and, most importantly, stop terrorists from escaping justice by hiding behind cooperation with the so-called moderate parties to the cessation of hostilities regime. These arrangements took effect on September 12. I repeat, the fact that the agreements have not been disclosed makes it difficult to say who is abiding by them and who is not. Here is one example. According to the agreements, the parties were supposed to ensure the security of the humanitarian convoy on Castello Road. We agreed that the Syrian government and opposition, who control opposite sides of the road, would both pull their troops back to equal distances from it, which was specifically mentioned in the agreements. The government troops started withdrawing as required by the Russian-US arrangements, only to see that the opposition did not reciprocate and even started shelling government forces. Several incidents of this kind took place. So far, the opposition troops have not withdrawn from Castello Road as required by the September 9 agreements.

On the whole, the Russian Defence Ministry is monitoring on an ongoing basis what is happening around Castello Road and Aleppo. From the ministry’s official website it is very clear who is abiding by the arrangements and who is not.

Last week, through the rapid response centre that we established with our US partners in Geneva, we notified our American colleagues about 300 ceasefire violations by Ahrar al-Sham and a number of other opposition groups, including those whose names were on the list of organisations that have purportedly joined the ceasefire, which was transferred to us. There were violations in Aleppo, in Hama, Homs, Latakia and Daraa provinces, and in the Damascus suburbs. I would like to underscore that this information is reliable and not based on internet or media reports but information obtained on the ground by Russian military monitoring groups. Consequently, this information is backed up by concrete facts. Violations include shooting attacks with light weapons, mortars and improvised multiple rocket launchers.

Coalition strikes on government troops positions at Deir ez-Zor on September 16 is a blatant violation of the cessation of hostilities regime. Furthermore, right after those strikes, ISIS forces attacked government troops. On September 19, there was another unacceptable provocation. I am referring to the bombing of a UN humanitarian convoy near Aleppo on a territory controlled by the armed opposition. Incidentally, it should be noted that on the same day, September 19, in the same area known as the Ramus road, Jabhat al-Nusra and allied detachments mounted a fierce attack on government forces. As a result, the jihadists advanced to Neighbourhood 1070.

I am not trying to make any accusations. However, I am convinced that such coincidences call for serious analysis and investigation. We insist on the most thorough and impartial probe into the attack against the humanitarian convoy. There are many indications that it could have been a rocket or artillery attack. Initially that was how it was reported. Then they started mentioning helicopters and then aircraft. Therefore it is probably necessary to refrain from emotional responses and to not immediately grab the microphone and make comments, but conduct a thorough and professional investigation.

It is also noteworthy that the distance between the site of the incident and the epicentre of the battle in western Aleppo, where Jabhat al-Nusra is active, does not exceed five to seven kilometres. Russia has provided all the data in its possession related to the attack against this convoy, including real-time video footage. Despite our calls regarding the need to influence the armed opposition and corresponding groups, as recorded in UN Security Council decisions, so far, very little result has been achieved in this sphere.

I mentioned the list that our US partners handed over to us, which lists about 150 organisations as participants of the cessation of hostilities regime. However, immediately after September 12, over 20 of these groups officially declared that they will not comply with the agreements. By the way, Ahrar al-Sham, which we proposed including on the list of terrorist organisations together with another group, Jaish al-Islam, as part of UN Security Council Resolution 2254, is also on that list. Our partners then said that this will prevent us from working efficiently. As a goodwill gesture we did not insist at that time, limiting terrorist lists to Jabhat al-Nusra and the so-called Islamic State.

Right after it was announced on September 12 that the Russian-US agreements had come into force, the Ahrar al-Sham leadership officially declared that it will not comply with them, because they designate Jabhat al-Nusra as a terrorist organisation while Ahrar al-Sham does not regard it as such and closely collaborates with it.

In the past two days, the Army of Islam tried to regain control over territories in Eastern Ghouta, part of the Damascus Governorate. At the same time, intensive fighting continued between government forces, Faylaq Al-Rahman and Jabhat al-Nusra. Faylaq Al-Rahman also coordinates its operations with Jabhat al-Nusra in Damascus’ Jobar municipality, from where Jihadists are launching regular mortar attacks against Damascus residential areas.

We believe the latest developments can teach us another lesson. It is necessary to involve all the parties to the conflict in maintaining security during humanitarian relief operations. This does not only apply to Russian and Syrian armed forces, to whom all appeals and requests are addressed. Armed groups and their sponsors should also provide the required guarantees. After obtaining these guarantees, UN representatives should always escort all convoys.

ISSG members held a meeting yesterday, and many colleagues were present there. Everyone called for reanimating the cessation of hostilities regime. It was suggested that a “regime of silence” be maintained on the first day. We are confident that this can only be accomplished through simultaneous, parallel and synchronised steps by all parties involved in the Syrian conflict, one way or another, without exception. Otherwise we would accomplish nothing. There will be no unilateral pauses. We have already been through this. 48-hour and 72-hour unilateral pauses were declared in the vicinity of Aleppo. During each “period of silence,” militants, including Jabhat al-Nusra, received reinforcements, ammunition and weapons. We should not even discuss unilateral measures today. All ISSG members without exception, especially those mentioned by the UN Security Council President, Prime Minister of New Zealand John Key, should, indeed guarantee that units on the ground on which they can exert influence will comply with all provisions related to the cessation of hostilities regime. Chances are that the ceasefire regime will continue, if we manage to agree on this comprehensive approach. Instead of merely reaching an agreement, we will have to make sure that these obligations are fulfilled.

In conclusion, I would like to note that we have always focused on the resumption of intra-Syrian political dialogue without any pre-conditions, in line with UN Security Council Resolution 2254. This process should involve representatives of all ethnic groups and religious groups so as to fulfil the roadmap stipulated by this resolution, which should lead to a solution to the Syrian crisis within 18 months, as we expected at the time. Otherwise we would fail to achieve a lasting political settlement, preserve Syria’s territorial integrity, rebuild its economy, and to bring back refugees and internally displaced persons.

Russia supports the efforts of Staffan de Mistura, the UN Special Envoy for Syria. We urge him to continue closely cooperating with the Syrian parties to the Syrian conflict, so as to guarantee an uninterrupted and inclusive negotiating process. The attempts by certain participants to put forward pre-conditions, to present ultimatums and to sabotage UN Security Council Resolution 2254 are unacceptable. Unfortunately, these attempts continue. The UN and its Special Envoy Staffan de Mistura should not surrender to intimidation of this kind. We need to resume the talks as soon as possible, and we should tell those who demand pre-conditions for these talks that this runs counter to UN Security Council’s decisions. We stand ready to facilitate the efforts of Staffan de Mistura in every way, including through continued cooperation with all Syrian parties without exception, specifically, the Government of the Syrian Arab Republic and all opposition groups.