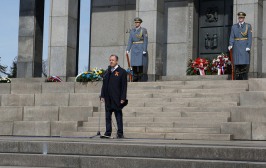 It is a great honour for me to take part in this ceremony.

We are marking the 70th anniversary of the liberation of Bratislava which was made possible by a joint operation carried out by the Red Army, the 1st Czechoslovak Army Corps, and Slovak partisans. They gave their lives for the freedom and independence of Slovakia, the Czech Republic, and the rest of Europe.

We are deeply grateful to the authorities and the people of Slovakia for the care they take of the war monuments and Soviet war graves. Russia and Slovakia have the same attitude toward the events in the war. Like our Slovak friends, we believe that the memory of war heroes must be honoured and any distortion of the truth must be prevented. It’s very important that young people in Russia and Slovakia have a correct understanding of history and remember the heroes who liberated their countries. Young Russians are actively involved in a movement to identify new facts about the war and its heroes. They are working on this in Russia and other countries, including Slovakia.

It’s greatly pleasing that the Kirov branch of the Russian Military Historical Society is working actively these days with their Slovak friends. I believe that it is necessary to continue these efforts until the fate of all of the fallen heroes is reliably established.

Our goal is to prevent the repetition of the tragic events of the 20th century and to ensure that the United Nations, which was created after World War II, remains the centre for all decision making pertaining to peace and security to ensure that no one ever attempts to dominate the world or to subdue others against their will.

I would like to give my heartfelt congratulations to all Slovaks on this wonderful date. Three hoorays for the heroes! May the memory of the fallen live forever!