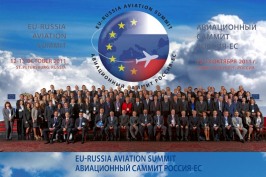 The first Russia-EU "Aviation Summit" was held in St. Petersburg on October 12-13, 2011. The event was attended from the Russian side by Sergey Ivanov, Deputy Prime Minister of the Russian Federation, Igor Levitin, Minister of Transport of the Russian Federation, Grigoriy Poltavchenko, Governor of St.Petersburg, Alexander Grushko, Deputy Minister of Foreign Affairs of the Russian Federation, Vladimir Chizhov, Permanent Representative of Russia to the EU and from the EU - Siim Callas, Vice - President of the European Commission, Maceij Jankowski, Undersecretary of State at the Ministry of infrastructure of Poland and Fernando Valenzuela, Head of EU Delegation in Russia, as well as by CEOs of leading enterprises of aviation industry, air carriers, airline companies, and representatives of aviation community, - more than 300 participants.

Vladimir Putin, Prime Minister of the Russian Federation, addressed participants of the Summit with a welcome letter.

The Summit discussed topical issues of cooperation between Russia and the EU in the field of civil aviation, including reduction of environmental impact of aviation, prospects for application of new technologies in air traffic management system, possibility of combining navigation systems and unification of rules of aircraft operations. Considerable attention was paid to cooperation in the field of aviation safety and security, to prospects of airport infrastructure development and industrial cooperation in the area of civil aviation.

In the framework of the Summit an understanding on procedures and modalities of entry into force and implementation of "Agreed Principles of the Modernisation of the Existing System of Utilisation of the Trans-Siberian air routes" was reached. Prospects of amendments to bilateral international air service agreements between Russia and EU Member States were specified which would exclude the notion of “national carrier” as far as the EU is concerned. In addition to that, work has started on a draft Memorandum of cooperation between Russia and the EU in the field of air navigation.

The forum has become a solid platform for discussing the most important issues of international cooperation in the field of civil aviation, establishing business contacts among air companies and stakeholders of air industry.