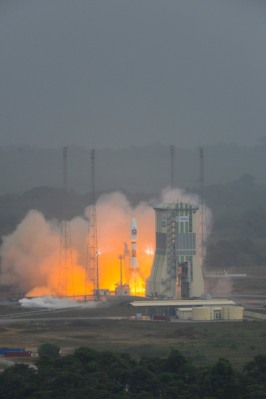 On October 21, 2011 a Russian Souyz-st launch vehicle made its maiden flight from the space port of Kourou in French Guyana. During the launch the first two satellites of the European Union Global navigating satellite system “Galileo” were put into orbit around the Earth.

This start is a bright symbol of successful Russia-EU cooperation in space.

The project “Souyz in GSC” (Guyana Space Centre) is being implemented on the basis of an Intergovernmental Agreement between Russia and France signed in November, 2003. It is planned that 2-4 starts of the “Souyz” will be carried out annually from GSC.