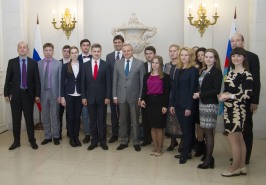 On 16 October Deputy Permanent Representative of Russia to the EU Sergei Kopyrkin hosted a traditional meeting with a group of "young leaders" – representatives of political parties, academic community, federal and municipal authorities – who visited Brussels as part of annual information visits under the auspices of Hanns Seidel Foundation.

The lively and thoughtful conversation covered some aspects of the current state of Russia-EU relations. Prospects of their rehabilitation on an equitable and mutually beneficial basis were discussed. The participants were keenly interested in how the internal challenges faced by the EU influenced its decision-making in foreign policy, in particular towards Russia.

We thank the organisers for the visit and look forward to continuing these rewarding exchanges in the future.