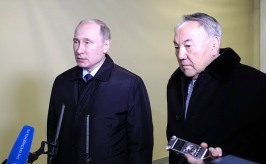 President of Vladimir Putin: First of all, I would like to express my most heartfelt condolences to the families of our citizens killed in the Tu-154 crash in the Black Sea this morning.

The Government has been instructed to set up a commission to be headed by the Transport Minister. A thorough investigation will be conducted to determine the cause of the plane crash and every effort made to provide support to the families of the victims.

Tomorrow will be a national day of mourning.

President of Kazakhstan Nursultan Nazarbayev: I have already expressed my condolences on behalf of the Kazakh people and from me personally over this tragedy that took lives of young people. The causes have yet to be determined. This is terrible, of course.

I would like to once again – I have already told Mr Putin – extend my condolences to the families and friends of the plane crash victims on behalf of Kazakhstan and from me personally. I think the commission will investigate this and the result will be known. But these lives are lost forever.

We stand in this together with Russia and the Russian people. We are saying to everyone – Russia’s leaders and the families and friends of the victims – we stand together with you in this moment of tragedy.

We arrived to hold a Eurasian Economic Union meeting tomorrow, and now this tragedy has happened.