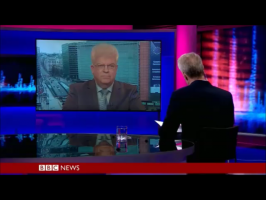 Interview of Ambassador Vladimir Chizhov, Permanent Representative of the Russian Federation to the EU, with BBC programme “Hard Talk”, 4 April 2016

Excerpts from the Ambassador's answers

«Actually no, the Cold War is not back. That depends, of course, on the definition that you put in that terminology. In my view, the Cold War was actually a confrontation between two ideologies. There is no such confrontation today. The fact that the West is beefing up its own imagination about Russia’s intentions is a totally different thing. Russia does not intend to pursue confrontation with the West».

«I think these efforts that you refer to by the West, the US and some of their European allies, including the UK, they are misplaced. And I think you are looking in the wrong direction trying to find an enemy. If there is an enemy today, it is our common enemy – international terrorism which reared its ugly head a few days ago here in Brussels».

«Well, fortunately enough, the US is not putting a brigade into Ukraine yet - that would have been direct confrontation, but I think there is no evidence that Russia has made any aggressive moves in Ukraine or against Ukraine».

«To begin with, there was no invasion of Crimea. Russian troops have been in Crimea for the last 250 years, including most recently, on the basis of a bilateral Russian-Ukrainian treaty signed in 1997. The Russian naval base in Sevastopol and Russian contingents across Ukraine were there on a perfectly legal basis, so, I think, you distort the course of events claiming there was some sort of an invasion».

«If there is any sign of fear (of Russia) which I believe you are exaggerating but even if there is one, I think that’s very disappointing. I would point to the responsibility of the media including your channel. I don’t think that producing pseudo-documentaries like the “War room” that BBC broadcast a few weeks ago is in any way helping to allay those fears».

«In the view of many other people it is what the Western propaganda machine is doing – distorting reality, like claiming that Russia is the aggressor and of course it is also additionally filled with statements both from civilian and military officials like General Breedlove saying that what NATO needs is to return to the U-2 reconnaissance flights over Russian territory. I think that is a very dangerous development».

«Yes, I will not claim that there is no animosity or no confrontational mood. But again I think it is misplaced, that’s not the direction we all should be looking to. I would suggest that we take a deep breath and have a closer look at our mutual interests and then we will see what to do next. Actually political dialogue in that sense is helpful. You have been referring to the United States a number of times. Actually the dialogue that is currently maintained at the level of Presidents Putin and Obama and Foreign Minister Lavrov and Secretary of State Kerry who talk on the phone at least on a weekly basis»

«Well, to put it squarely, the ball for the implementation of the Minsk agreements is squarely in Kiev’s court because none of the obligations that Kiev and President Poroshenko himself signed up to have been fulfilled, neither there is a law on special status of the Donbass region, nor is there a law on amnesty, nor a law on local elections. So, yes, the situation is tense. According to the reports of the OSCE Special Monitoring Mission the number of heavy weapons that are missing from declared depots on the Ukrainian side is 10 or 15 times greater than on the side of the Donbass forces».

«Again you are exaggerating: the Russian economy can survive those unilateral restrictive measures which you referred to as sanctions while sanctions according to international law can only be imposed by the UN Security Council, there’s no other authority who can do that».

«The negative effect on the economy as you rightly said is primarily due to the fall in the world oil prices. Of course, the so-called sanctions are also a contributing factor, but not to the extent that would bring the Russian economy into the state of ‘shatters’ which some politicians have been referring to».

«So far, the popularity of President Putin and his Government has been soaring rocket-high. We will have parliamentary elections in September, that’s close enough, there you will see what the Russian electorate really thinks».

«The bulk of the Russian Air Force contingent has been pulled out, some forces have remained and they actually assisted the Syrian army in liberating Palmyra, the world-known heritage site, and that liberation unfortunately has not been welcomed by Western countries, including the UK. I think what has been said about it by the UK Foreign Secretary is not worthy of being repeated».

«The Syrian Government’s position, and I don’t want to sound as an advocate for President Assad – we have been doing what we were doing in Syria at his request indeed, but we are not in a military alliance. Russia’s goals have been made quite open and transparent – to see a political solution in Syria. And that is what President Assad has publicly committed himself to. The talks that go off and on in Geneva because of procrastination by certain opposition forces and certain members… well, actually one member of the International Syria Support Group, they have created a framework for seeking a political solution which would be in the interest of all Syrian people including the Kurds who are unfortunately not yet there at the negotiating table.

«The new Constitution, yes, definitely, a political process. What the outcome of this process will be is not for you or me to decide, it’s up to the Syrian people. They will have elections and these elections will bring the results that reflect the will of the Syrian people».

«When such allegations are made, whoever makes them, they should be substantiated by evidence. That has not been the case regarding our actions in Syria. These are just words… If there is such evidence it should be processed in due course accordingly. It worries me because these allegations should be checked and double checked».

«I am sure it’s part of his [president Putin’s] mindset today. Russia has traditionally been part and parcel of what we all call the European civilization, actually one of the pillars of European civilization… From the point of view of geostrategy, Russia cannot be isolated from any direction, but in terms of values and civilizational ties Russia of course remains part of the broader European civilization. Perhaps, it is not the way some people in the West would like to see Russia, but then it is their problem».