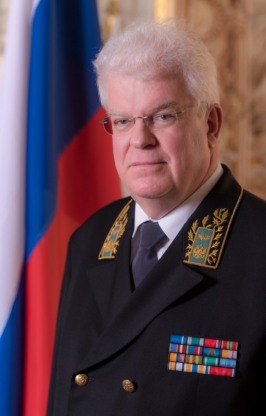 Question: Last month, the Bulgarian Prime Minister Boiko Borissov said during the European Council that the current situation between Russia and Western countries/the EU is harder than during the Cold War. Do you share his point of view?

Vladimir Chizhov: I believe the current state of play between Russia and the European Union is indeed abnormal. Of course, it has never been a smooth history. We have had ups and downs for years that I have been dealing with the EU, almost 20 years in different capacities.

Now the situation is poisoned by certain factors that affect what had been achieved in the previous years. And specifically, the sophisticated architecture of bilateral cooperation which we built jointly with our EU colleagues over the years remains in the best case idle, or perhaps more accurately, frozen.

This doesn’t mean all doors are shot. We maintain lines of communications, political dialogue, practical cooperation in various areas that are of mutual interest.

But this is not the level of interaction we both deserve.

Question: Last October, during a speech, you spoke in favour of a new partnership with the EU. Can you explain what kind of partnership do you want?

Vladimir Chizhov: One of the few things that we’ve agreed on with the EU all along is that none of us wants a simple return to business as usual, to what we had before. This shake-up of relations, looking at it in a positive way, gives us an opportunity to rethink and rebuild our relationship, making it more pragmatic, more result-oriented, perhaps with fewer slogans.

Question: So Mr. Hahn talked about more economic cooperation, Mr. Juncker about cooperative pan-European security order. Do you think it’s realistic to have these kinds of cooperation?

Vladimir Chizhov: It is not only realistic, it’s necessary and even inevitable. I don’t think anybody can talk seriously about creating European security without Russia and much less against Russia. Russia is as much part of our joint European continent as is the EU. And it’s a continent that we share not only geographically, but also regarding its political destiny.

On the economic side, even with so-called sanctions and counter-measures taken by the Russian government, the EU is still number 1 trading partner of Russia and Russia is number 4 trading partner of the EU, and number 3 exporter to the EU market.

We are a major supplier of energy, of a number of important commodities and of course you know the people-to-people links and cooperation between civil societies, it is something that is essential for Europe to be our joint continent of peace and stability.

Question: Do you think that the Skripal case is a turning point in the EU/Russia relations?

Vladimir Chizhov: No. I think it’s another attempt in a line of similar attempts by the British authorities to poison Russia-EU relations, not only Russia-UK relations. Figuratively I can describe it as Britain leaving the EU, but eventually wanting to slam the door behind them with a big bang.

Question: The relationship with the United Kingdom is not the best one right now. But do you still have some allies in the European Council or the EU Council?

Vladimir Chizhov: I wouldn’t name names. But I understand that there are different views. And I see as something very unfair to the other members of the EU this attempt by London and Washington to ramp-up solidarity over this Skripals case without providing any evidence. And that has not gone unnoticed by other countries.

Question: One of the fields of action of the EU is “strengthening EU resilience to Russian threats” (by threats EU is thinking about propaganda and fake news, cyberattacks, financing of populist parties and so). Is Russia a threat for the European democracies?

Vladimir Chizhov: No. Russia is not threatening anyone. And it has never had the intention to. Russia has not closed any channel of communication with anybody. We are working with different countries, not only Western countries, but also with China, with Turkey, with Iran to resolve the Syrian crisis. It’s the success of Russian diplomacy along those tracks that has annoyed Western countries.

Russia is not interfering in anybody’s election or undermining any democratic society. Russia is open for cooperation with everybody. This cooperation should of course be a on an equal footing, not a relationship of a teacher and a pupil.

Question: Mrs. Mogherini and Mr. Lavrov agreed to step up contact between the EU and Russia on the main foreign policy issues. One of them is Syria. How is it possible to cooperate with the EU, while you have some different, to not say totally different point of view to resolve the crisis?

Vladimir Chizhov: I wouldn’t say we have totally different points of view. We all want Syria to be a peaceful country, to be a unified, single country, politically independent, avoiding terrorist activities. And it’s up to the Syrians to decide who they want to see as their government, as their President.

Question: Last week, there was an alleged chemical attacks in Duma. Why Russia did not allow an investigating to happen on the ground?

Vladimir Chizhov: Russia has not only allowed, but invited and insisted on an investigation on the ground. The Syrian government filed a request with the OPCW, and investigators are actually on their way to Douma. Russian chemical protection officers went to Douma the day after these fake videos were filmed by the infamous “White helmets” and they did not find a single dead body, a single person suffering, they visited the only functioning hospital in Douma, the chambers were empty and doctors said that they did not hear about a single case. So it was all fake.

If “new beautiful smart” missiles - as described the US President – fly, this will constitute an act of aggression in my view. And if as a result of that any Russian citizen - there is Russian military police on the ground deployed in Douma to keep order - is hit, Russia’s reply will be coming immediately.