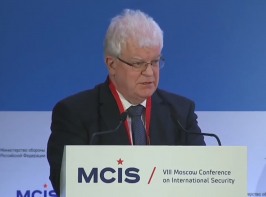 Remarks by Permanent Representative of Russia to the EU Ambassador Vladimir Chizhov at the Plenary Session “Hybrid warfare and “colour” revolutions: common and specific aspects” within the framework of the 8th Moscow Conference on International Security MCIS-2019,

To begin with, I would like to note that our session’s theme chosen by the organisers is, without exaggeration, more than topical. It so happened that, being quite helpful themselves, the new technologies one could have hardly imagined in times of the Cold War at the current stage are adding further difficulties to already complicated international relations. Therefore, the 21st century global “chess board” comprises more projections of these very new technologies than tanks and aircraft (although their importance should not be underestimated). Today the image of a soldier holding a laptop rather than a gun looks quite grim. And it is hard to overestimate the role of our today’s hosts, the Ministry of Defence, in countering hybrid threats.

The character of a hypothetical conflict in the modern world is also changing. Its participants would aim at gaining possibility to influence the lifestyle, behavioural stereotypes and ultimately the decision making process, rather than causing irreparable damage to manpower and economy of a would-be adversary. While in some parts of the world people still have quite vague ideas of hybrid wars and in the Russia-US relations they are rather unleashed in a virtual space, Europe may be called the real arena of hybrid wars that already produce quite tangible results.

On multiple occasions I read in the Western press deliberations that one can regard as eccentric and even paranoic but quite illustrative at the same time. Some Europeans are convinced that political projects were executed in a number of EU countries that, with the help of short-term but technologically advanced and massive PR campaigns in traditional and social media, persons without clear political profile and almost unknown to voters were brought to power. Let me refrain here from listing countries and personalities – they are well-known anyway.

I would only say that experts from the established and respected French Institute of International Relations (IFRI) claim that the launching “Servant of the People” series on Ukrainian TV back in 2015 was no coincidence, but a new model of projecting political reality when voters’ brains are preliminarily programmed by relevant entertainment content. I would note that the rights to the above-mentioned series belong not to RT or “Sputnik” but to an American company called “Netflix”.

So, why are European brains so absorbed today with the issue of hybrid wars? Describing the current stage of international development many politicians and military representatives note its unpredictable character. This is both the case and not quite so. The unpredictability of certain players is an objective reality, of course, one doesn’t need to go far to find examples. But in our unpredictable world there are also examples of absolute predictability. For instance, rivalry between the US and China: it is unlikely that anyone will question the fact that it is an obvious and long-term factor. Decreasing relative weight in the global economy and subsequent shrinking of political influence of Europe is, I suppose, an incontestable fact as well. And finally, citizens’ sentiment is growing more populist and, within Europe, also more eurosceptical. Moreover, they are sceptical not only towards the European Union but also the North Atlantic alliance that continues to call itself – largely by inertia – “the most successful in history”.

May I note “on the margins” that the current EU crisis is to a large extent the result of the wrong choice it once made. Hereby I do not refer to the admission of United Kingdom to the EU back in 1973 as many could think today, in the middle of Brexit. It is about another choice – the one between EU enlargement and deepening of European integration – that was made by the British together with the others (with the UK having played an active role in that, by the way). One of the victims to that decision was the Common Foreign and Security Policy of the EU. As a result, the Brussels discourse on its strategic autonomy today turns in one way or another towards strengthening EU-NATO cooperation. Had the EU chosen a different path, today the military and political scenery in Europe could have looked  differently and we would not be observing the NATO-centric approach in external and defence policies corroding the EU as rust. It is clear that in such a situation presenting their union as a “besieged fortress” and disseminating scary stories about an omnipresent “external enemy” form advantageous tactics for the EU. The process of developing EU-NATO cooperation mechanisms is known to be guided by the very motto of countering hybrid threats allegedly coming from Russia.

In European minds, “Russian interference” in all the elections in our galaxy is undoubtedly the most vivid manifestation of hybrid wars today. Brussels, of course, is particularly worried how the electoral campaign to the European Parliament would unfold – its new composition will be defined by European voters in a month’s time, on 23-26 May. And naturally it is much easier for Eurobureaucrats to think that populists and eurosceptics will find their way into the European Parliament only due to “Moscow tentacles” that have infiltrated all the EU computers rather than voters’ will and their own miscalculations. A couple of weeks ago a so-called “staff exercise” was even carried out in the European Parliament building in central Brussels to counter cyberthreats in the course of the elections. That is indeed particularly strange as it is up to EU Member States to both organise the voting process and count the ballots.

It is notable that Julian King, the European Commissioner in charge of establishment of the Security Union in the EU (a British national, by the way), is absolutely convinced that interference has already taken place and will inevitably happen again – regardless of the fact that no one has ever demonstrated any relevant proof.

Under these circumstances the European Union puts a lot of effort in recent years to strengthen its “cyber army” and build up its legal framework in the field of “increasing cyber resilience”, as they call it in Brussels. For instance, a few days ago a legislative act was adopted to transform the EU Agency for cybersecurity [originally called EU Agency for Network and Information Security, ENISA], a temporary body with a mandate expiring in 2020, into a permanent agency. Its budget will increase progressively from current 11 million euro to 23 million euro, and the staff will grow from 84 to 125 members. And it is just one of several EU organisations working in cyber space.

Fighting disinformation is another fetish within the scope of countering hybrid threats. Moreover, in this field Russia is again Brussels’s enemy No 1. For instance, the European Parliament resolution of 13 March 2019 on “Counteracting Propaganda by Third Parties” claims, without either doubt or proof, that our country “constitutes the main source of disinformation in Europe”.

In countering this inflated monster EU institutions are also trying to adopt a systemic approach. For example, in early March 2019 they launched a Rapid Alert System, a secure portal that accumulates information from EU-wide structures and Member States on current disinformation campaigns and recommendations for counteracting them. Brussels demands that online platforms and social media thoroughly respect the voluntary obligations they assumed in autumn 2018 within the “Code of Practice against Disinformation”.

The East StratCom Task Force created in 2015 within the European External Action Service is, without any doubt, a pioneer of such fight. The initial plan provided that it would be primarily in charge of “effectively communicating EU policies towards the Eastern Neighbourhood”. But in reality the Task Force devoted itself to circulating anti-Russian propaganda and disseminating libels, including about the “Immortal Regiment” movement and celebration of the Victory Day in Russia. Today this structure has grown to incorporate three divisions that are combating, as they portray it, disinformation in Eastern Europe and Ukraine, the Middle East and North Africa as well as Western Balkans. As for its budget that is almost 1 million euro a year, many EU leaders suggest increasing it up to 5 million euro a year or even more.

What should Russia do in such situation? The recipe is simple and, I would say, traditional. One of the reasons for such hype around fighting in the cyber field is that it is not yet regulated by established norms of international law. It has a natural explanation – when the UN Charter was written no one could imagine massive computerisation, and even in the Cold War times computers occupied entire rooms. Constantly referring to the primacy of international law, Russia has never considered it to be a rigid matter carved in stone – we are convinced that cybercrimes must be codified. I see a flash of hope in the fact that EU leaders, for instance, High Representative of the European Union for Foreign Affairs and Security Policy Federica Mogherini, are calling to promote international cooperation towards enhancing security and stability in cyberspace and mark her readiness to engage in relevant discussions on the UN platform.

Moscow has made multiple attempts to establish such cooperation – proposing a concept of Convention on International Information Security, introducing draft UN GA resolutions, taking a most active part in the work of the relevant UN Group of Governmental Experts in all its compositions. Currently two specialised negotiating structures on international information security are being established within the UN: an Open-Ended Working Group for all UN member states and still another Group of Governmental Experts. Russia suggested establishing the former, and the US, formally, the latter. Actually both formats had been initially suggested by our country while Western states demonstrated scepticism towards them and expressed criticism on any possible occasion.

I cannot fail to stress that the EU, referring to the 2015 report of the Group of Governmental Experts, especially emphasises that states should not allow deliberate usage of their territories for committing cybercrimes. Meanwhile they elegantly “forget” the information widely circulated by the British media in 2018 that London is considering the possibility of carrying a cyber-attack on Russia, as well as NATO preparations to conduct cyber wars.

Unfortunately, we are already accustomed to such “compound” approaches by our Western partners. I guess that Europeans will certainly be talking about a new department being created within the Russian Foreign Ministry that would be in charge of international information security issues. Well, the brand “troll factory” has already been used at another address. But even in such situation we should not give up. I am convinced that our consistent and persistent work in the cyber legal field will sooner or later deliver results.