The 13th meeting of the Russia-EU Permanent Partnership Council on Freedom, Security and Justice 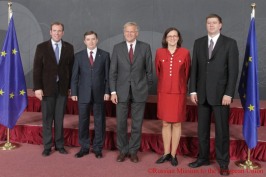 The thirteenth meeting of the Russia-EU Permanent Partnership Council (PPC) on Freedom, Security and Justice was held in Brussels on 18-19 November 2010. The Russian delegation was headed by Alexander Konovalov, Special Envoy of the President of the Russian Federation for cooperation with the European Union in the area of freedom, security and justice, Minister of Justice. The delegation included Sergey Bulavin, State-Secretary, Deputy Minister of the Interior, Konstantin Romodanovsky, Director of the Federal Migration Service, Vladimir Kalanda, First Deputy Director of the Federal Service for Narcotics Traffic Control, Sergey Beseda, Deputy Director of the Federal Security Service, Valentin Pirozhkov, Chairman of the Judicial Board on Administrative Cases of the Supreme Court, Tatiana Andreeva, First Deputy Chairperson of the Supreme Commercial Court, Vladimir Zimin, First Deputy Head of the International and Legal Cooperation Department of the Prosecutor General’s Office.

The Parties discussed the progress achieved in the implementation of the Russia-EU Roadmap on the Common Space of Freedom, Security and Justice and identified priority areas of cooperation. In particular agreement was reached to establish a dialogue on migration matters; promotion of cross-border cooperation between Russia and EU Member States was discussed as well as cooperation involving the European Agency for the Management of Operational Cooperation at the External Borders of the Member States of the European Union (FRONTEX). Participants of the meeting discussed combating transnational crime, illicit drugs, terrorism; they reconfirmed their commitments and the necessity to intensify efforts in the fight against trafficking in human beings. They agreed to continue strengthening judicial cooperation in civil and commercial matters.

The Parties endorsed the report of senior officials overseeing the Russia-EU visa dialogue. The Russian side stressed once again the necessity to waive visas for travels of Russian and EU citizens.

A Joint Statement was adopted at the meeting.