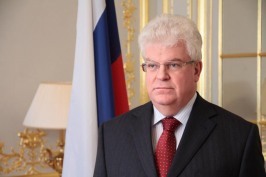 Three German members of the Greens / European Free Alliance Group of the European Parliament have called upon EU leaders to tackle a suggested COVID-19 disinformation campaign allegedly waged by Russia. How would you comment the letter that contained the call?

This document would not have deserved reaction had it not been for the moment when it appeared.The current situation of the coronavirus pandemic clearly requires all states and nationsto unite forces. And at this pointgetting obsessed with such narratives and accusations – obviously groundless – is more than odd.

And don’t you feel any additional pressure from the European Union in view of the words “Russian disinformation”?

And also“disinformation” from China, by the way. You know, I believe that obsession with so-called “Russian disinformation” is due to intellectual poverty of those dealing with it. Probably, there is an instinctive inclination to shift to others all the problems brought by the current pandemic.

Western Europe has enough of these problems. We see the numbers shown by certain EU countries regarding those infected, we know the extent of mutual grievances between member states, the problems European institutions are facing in their attempts to find common solutions and a common way out of the situation. There can be diverse opinions on these matters. But at this stage, as the famous Chinese proverb goes, distracting public attention to searching for a black cat in a dark room, especially when it is not there, is shameful, to say theleast.

You have mentioned internal problems the European Unionhas faced due to the coronavirus. How timely has the EU leaders’ response been to them?

I would not like to resembletheactors I have just criticised and comment on this subject at such a delicate moment.Although an unbiased observer may notice that the EU leadership has been a bit late in its response. But let us attribute it to the fact that it is still “young” – rotation on key posts took place just a few months ago.

EU economic problems caused by the current pandemic will by no way disappear. They are here to stay. Cash is being massively injected to support certain sectors of the economy – not only in the European Union, but also in the US, China and in my country, Russia. European Union leaders discussed the situation on 26March, but did not manage to achieve full unity on all points. For instance, they postponed their own decision by instructing the Eurogroup to elaborate response measures to the crisis caused by COVID-19 in two weeks’ time: the next meeting of the Eurogroup is scheduled for 7 April only.There may be contacts in between though.

By the way, all this is happening now in videoconference format. And how effective such communication is remains a big question. This format of negotiations will probably stay popular after the crisis. As it is certainly cheaper than meetings in person. But there arises the issue of confidentiality, as well as that of elaborating legally binding decisions. How are they supposed to be signed? Of course, the so-called written procedure for signing decisions has long been applied in EU countries.But it can protract the process.

For the time being, it would be obviously premature to talk about the modalities of European Union’s exit from the crisis.However, the statistics of recent days indicate that those European countries that were the first to sink deeper into it will probably be among the first to start coming out. I am referring to Italy, first of all.

How will the European Union endure this crisis?

One should not embrace all sorts of theories that this is the beginning of the end of the European Union.In my personal opinion, it is not the case. I believe that the European Union has the potential of resilience againstexternal challenges. We have witnessed it before.Take the global financial crisis of 2008-2009, the eurozone crisis that followed.There was also the migration crisis with its peak in 2015, and recent years saw the epic Brexit unfolding before everybody’s eyes.And every time there were those who thought the European Union would fall apart. But it did not.

I do not want to fall into extremes. The EU, as wellas the rest of the world, will certainlysuffer from calamities caused by the current pandemic, and it is difficult to predict in detail yet in what state the European Union will emerge from the crisis. But it will.

Do you think we will see in the future the strengthening of pan-European anti-crisis measures to counter the consequences of coronavirus?

Probably yes. But it is too early to talk about it.

What lessons can the EU learn from the current situation?

One of them may be that the ideologues of continued European integration will start thinking more pragmatically.I mean they may have fewer illusions and, I would say, make fewer attempts to run ahead of the caravan. Let us recall the situation of 2004 when an “explosive” expansion of the European Union occurred. Then, 10 countries – the Czech Republic, Poland, Cyprus, Malta, Estonia, Latvia, Lithuania, Hungary, Slovakia and Slovenia – joined the EU.Prior to that the EUhad a choice of path to make – mechanical expansion of the union or deepening integration within the previous composition. Choosing the first path resulted in considerable difficulties both within the EU itself and in its relations with external partners, including my country.By the way, Russian representatives had warned their colleagues in the EU of this danger.

Can the current situation stall the EU enlargement process – even though member countries have finally approved the launch of accession negotiations with Albania and North Macedonia?

From my point of view, the political decision on Albania and North Macedonia to launch negotiations without specifying the date of their real start,let alone their end, makes little difference in practical terms. However, it sends a powerful political message not only to those countries, but also to other applicants, as well as to the rest of the world, that the European Union is alive and still attractive. It is also a signal to itself: despite the current crisis, representatives of EU countriesmanaged to agree on an issue that had been the subject of their lengthy and serious disputes.

I have a question on sanctions. Against the backdrop of the global pandemic and the need to combat it, there were statements that sanctions are inappropriate at the present time.

That is what UN Secretary General António Guterres was saying, and his appeal was supportedby many countries. Russia also backed it, and at the highest level.

Is anything changing on this track in the EU?

To be honest, I do not know for sure. We are still not discussing the issue of so-called sanctionswith the EU. As we were not the ones who imposed them, it is not up for us to initiate their lifting. In March the European Union extended once more individual restrictive measures without special pomp. How will Brussels proceed further? Let us see what their conscience tells them.