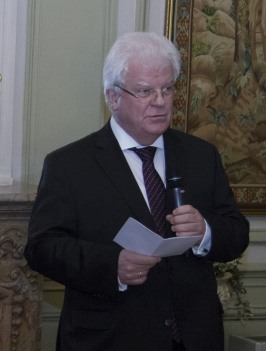 I am delighted to welcome you tonight at the Russian Permanent Mission to the European Union at an event dedicated to the 30th anniversary of the Agreement on Trade, Commercial and Economic Cooperation between the USSR and the European Communities signed in Brussels on 18 December 1989. Taking the decision to conclude such an agreement Moscow and Brussels proceeded from the assumption that their partnership would be sustainable and long-term regardless of tactical political and economic fluctuations – that, in other words, it would have a strategic character.

In the course of the past three decades both signatories of the Agreement underwent considerable changes: Russia became a continuator state of the USSR, and the European Communities were transformed into the European Union. Gradually and, I would precise, with a lot of effort we succeeded in building a unique architecture of cooperation encompassing various dialogue formats
(I would remind you that a few years ago we had as many as 17 sectoral dialogues). A substantial legal framework was elaborated, and first of all the Partnership and Cooperation Agreement signed in 1994 that still serves as a solid foundation for full-fledged Russia-EU dialogue in a wide range of areas.

Russia and the EU have held a total of 32 summits, and I would put an emphasis on two of them. At the Saint Petersburg summit in May 2003 we agreed on building Russia-EU strategic partnership based on establishment of four common spaces: economic; of external security; of freedom, security and justice; and of research and education, including cultural aspects. And the Moscow summit in May 2005 saw the signing of respective Road Maps that became a practical tool for strengthening relations in all fields.

However, as ancient Greeks warned all of us, everything changes and nothing stands still. It is certain that today we cannot say that Russia-EU relations are normal. Anti-Russian unilateral restrictions introduced by the EU in March 2014 and expanded repeatedly ever since are the most unnatural factor poisoning them. Many mechanisms of Russia-EU cooperation are standing idle.

Meanwhile it is obvious that the interdependence between Russia and the EU is still there: against all odds, the European Union accounts for almost half of our country’s trade turnover, European business continues investing in its economy, Russians are getting record numbers of Schengen visas, implementation of multiple joint projects in culture, education and science goes on, cross-border cooperation is progressively developing.

Brussels realises, slowly but steadily, that it is not easy, if at all possible, for Russia and Europe to live and develop separately. I believe it is short-sighted to continue remaining at a “semi-frozen interaction” stage on the Russia-EU track while bilateral dialogue between Moscow and a whole range of European capitals is gaining momentum. Make no mistake: no significant international problem can be resolved without Russia, and our tasks on the international arena are converging in many aspects, far beyond the so-called “selective engagement” strategy. Besides, our economies are mutually complementary, common transport and energy infrastructure has long existed and continues to expand. A synergy of human, scientific, technical and resource capacities of Russia and the EU, and of the Eurasian Economic Union and the European Union, in broader terms, would open new horizons to develop our countries and facilitate defending our positions within growing global competition.

Elaborating on important anniversaries, we often cannot help applying them to our own lives. For instance, I have been dealing hands-on with Russia-EU relations since 1999 having seen all the ups and downs along the way. I remember numerous milestones Moscow and Brussels have gone through, many difficult situations, but even more joint successes and achievements. I am one hundred per cent sure – in the course of another EU institutional cycle that started just ten days ago we may witness a “new beginning” of our relations that, given the experience we have had, will be mature, wise and mutually respectful.