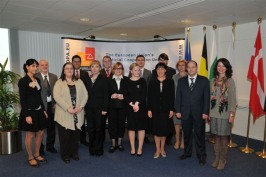 The 4th round of negotiations on a Draft Agreement on Cooperation between the Russian Federation and Eurojust took place in The Hague on 21-22 October 2010. The Russian delegation comprised experts from the Ministry of Justice, Ministry of the Interior, General Prosecutor’s Office, Investigation Committee under Prosecutor’s Office, Federal Security Service, Federal Service for Narcotics Traffic Control and Federal Service on the Supervision in the Sphere of Communications, Informational Technologies and Mass Communications (Roscomnadzor).

The meeting, held in a friendly atmosphere, allowed to bring closer the approaches of the Parties on a number of issues. It was decided to hold next two rounds in the first half of 2011.