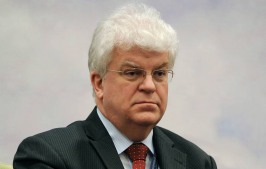 Ambassador, how would you describe EU – Russia relations today?

They have stabilised at an abnormally low level following the imposition of unilateral restrictive measures – sanctions, as Europeans call them – against my country.

I see a growing need on both sides to bring our relations back to normal and work more closely with each other again. We had well-functioning structures that steered our partnership, such as regular meetings at all levels. We have common interests – in trade or the fight against international terrorism. I am cautiously optimistic that our relations will improve again in the foreseeable future.

For that to happen, Moscow would have to be ready to implement the Minsk Agreements of 2015 to bring peace to Eastern Ukraine.

Have you read them?

A long time ago.

If you refresh your memory, you will see that Russia is not mentioned in the Agreements at all. It is up to the parties to the conflict – Kiev and Donbass – to fulfil their obligations. It was absolutely wrong to link the internal conflict in Ukraine with EU – Russia relations. Russia had worked constructively on the Minsk Agreements, as had Germany and France. But once they were signed, unilateral measures against my country were further toughened. It is absurd.

Why is it? Russia has been clearly identified as a destabilising factor in Eastern Ukraine.

The EU should have better considered Russia as a rescuer of Donbass – from Ukrainian ultra-nationalists and neo-Nazis.

Where can the EU and Russia work together despite major conflicts?

Russia and the EU are two pillars of the Eurasian civilisation. Close economic cooperation with Russia is the only option for the EU to maintain its political and economic influence in today’s multipolar world with rising economic powers such as China, Latin America and at some point Africa. This includes establishing a common area of economic and humanitarian cooperation from Vladivostok to Lisbon.

So, is Russia supposed to save the EU?

It is not a question of who saves whom. It is about how to cooperate for the benefit of both sides.

What do you suggest?

There are no limits for our cooperation. The EU is often biased against my country. Well, it is up to them. But for Russia, the EU remains a strategic partner, at least potentially.

What does reconciling mean here? Our economies are structurally complementary. And it is not that we have nothing better to do than build pipelines that – despite resistance from some EU countries – bring gas to Europe.

Russia makes a lot of money out of it.

The main thing is that we strengthen Europe’s energy security. Another example: despite EU’s unilateral measures against Russia, we have long-established cross-border cooperation, especially in the North-West of Russia – with Finland, Sweden, Poland and the Baltic countries. This is even financially supported by the EU. It works very well. Such transnational cooperation is aimed at strengthening border regions in terms of migration management, tourism, economic development and environmental protection.

Where else could we work together?

We are already working together on counter-terrorism and crime prevention. These days a Russian delegation is discussing more intensive cooperation with Europol in The Hague. We are ready to talk about artificial intelligence and the European Commission’s proposal for a Green Deal. The temperature increase in Russia is two and a half times higher than the global average. So climate change is a problem for us, too.

The Head of the European Commission Ursula von der Leyen has announced a “geopolitical commission”. Are you concerned?

It is too early to consider what it means in practice. We are following it very closely.

EU High Representative [for Foreign Affairs and Security Policy Josep] Borrell said that the EU needs to learn again the “language of power”.

Do you see opportunities for cooperation on foreign and security policy issues?

First of all, I see that the Euro-Atlantic security architecture is in a serious crisis. President [Donald] Trump abrogates arms control treaties and withdraws from the Iran nuclear deal, while the EU and Russia are firmly committed to it. Trump is only predictable in his unpredictability.

Europeans have been working more closely on defence policy since the end of 2017, for example in financing EU missions and arms projects, training of soldiers and alignment of armed forces structures. Is this project called Permanent Structured Cooperation (PESCO) a threat from Moscow’s point of view?

I believe the first country to see PESCO as a threat was the US – long before PESCO was even conceived. Washington sees it as a rival to NATO and its domestic defence industry.

And what do you think of this closer cooperation?

With PESCO, the EU wants to become more strategically autonomous. But if PESCO is only there to meet certain NATO objectives at the expense of EU taxpayers, such as building bridges, runways and roads to transport tanks to the East, I will take a very critical view. Then we have questions to ask. But in principle Russia does not see the increased cooperation of Europeans in defence policy as a problem. We are open to cooperation with PESCO.

Russia might well consider its participation in EU defence policy projects within the framework of PESCO. For example, cooperation with the EU on cyber defence or logistics could be envisaged, or our soldiers and experts could support EU operations in third countries. Russia already provided helicopters for the EU Chad mission in 2008, and we also worked with the EU to combat pirates around the Horn of Africa. Something of this kind could be further developed. But certainly we will not help build bridges so that NATO can move faster to the Russian border.

When will Moscow send its Ambassador to represent Russia to NATO? The post has been orphan for more than two years.

At this point in time we do not know what we could discuss with NATO in a constructive way. There is an official format for dialogue, the NATO-Russia Council. But NATO always wants to talk only about Ukraine and Georgia, though these two countries have nothing to do with NATO.

You could talk about Afghanistan. The Alliance and Russia are both interested in peace in the Hindu Kush.

This is not what NATO wants. Ukraine and Georgia are a kind of raison d’être for the Alliance. It was in a severe existential crisis. Suddenly, the two countries fell as ripe fruits from a tree right into NATO’s lap, thereby extending a lease of life for the Alliance.