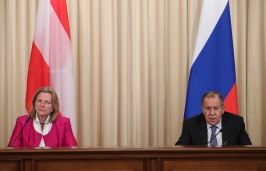 First of all, I would like to note that it was very pleasant to welcome my Austrian colleague, Federal Minister for Europe, Integration and Foreign Affairs of the Republic of Austria Karin Kneissl, who is visiting Russia in this capacity for the first time.

Our detailed talks encompassed a wide range of issues, primarily on the bilateral agenda.

We discussed the status of and prospects for bilateral ties, with due consideration for the results of the February 28 meeting between President of the Russian Federation Vladimir Putin and Federal Chancellor of the Republic of Austria Sebastian Kurz in Moscow. We noted that, despite the uneasy situation in Europe, sustained dialogue between our states continues to develop constructively.

We praised the current level of cooperation between our various national ministries, agencies and parliaments, as well as between Russian and Austrian regions. We praised stronger ties between civil societies. Russia and Austria advocate expanded cooperation relying on various mechanisms that have won a reputation for themselves, including the Mixed Intergovernmental Commission for Trade and Economic Cooperation, as well as the Russian-Austrian Business Council. We hope that these entities will meet in May and June.

We discussed the upcoming 50th anniversary of initial gas supplies from the Soviet Union to Austria and expressed satisfaction with the current level of energy cooperation, primarily under the joint projects of Gazprom and Austria’s oil and gas concern OMV.

We reviewed the implementation of the Declaration on Partnership for Modernisation that was signed in 2011. In this context we expressed our mutual interest in advancing large-scale infrastructure projects, including the construction of the wide-gauge Kosice-Vienna railway.

We are traditionally interested in expanding cultural and humanitarian exchanges. We praised the successful overlapping Year of Tourism in 2017. We are confident that the Year of Music and Cultural Routes, being held in 2018, will contribute to mutual understanding and contacts between people.

We also discussed relations between Russia and the European Union in connection with Austria’s upcoming presidency of the EU from July 1 and until the end of 2018.

We spoke in detail about various conflicts, primarily those in the Middle East, above all Syria, the status of the Palestinian-Israeli peace settlement and the situation in other conflict zones, including Iraq, Libya and Yemen.

We also discussed the Ukrainian issue. We believe there is no alternative to following through on the Minsk Package of Measures. We reviewed the OSCE’s role in implementing the Minsk Agreements and the possibility of bolstering this role by approving a UN Security Council resolution on protecting the OSCE Special Monitoring Mission. As you know, the Russian Federation submitted the relevant draft resolution to the UN Security Council in September 2017.

We also informed our Austrian colleagues in great detail about our assessments of the difficulties still hampering the fulfilment of the Minsk Agreements.

Russia and Austria are both interested in stepping up joint efforts in the area of counter-terrorism operations and illegal immigration. We hope that this dialogue will continue via bilateral channels and as part of Russia-UN relations.