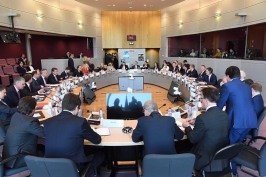 On 21 January 2019 trilateral consultations on the issues of gas transit were held in Brussels within the Russia – EU – Ukraine format. Minister of Energy of the Russian Federation Alexander Novak, Vice-President of the European Commission Maroš Šefčovič and Minister of Foreign Affairs of Ukraine Pavel Klimkin headed delegations of Russia, the EU and Ukraine respectively. Gazprom CEO Alexey Miller and Naftogaz of Ukraine CEO Andrey Kobolyev also took part in the negotiations.

In the course of the meeting the parties outlined their approaches towards modalities of future legal and contract terms of transiting natural gas from the Russian Federation via the territory of Ukraine to EU member states, and in particular exchanged views on how decisions taken by the Stockholm court of arbitration would influence future transit. It was decided to continue trilateral consultations at political level in May 2019.

During his visit to Brussels Alexander Novak also held a bilateral meeting with Maroš Šefčovič. Besides the Ukrainian transit, it focused on the situation around amendments to the EU “Gas Directive”, progress in implementation of gas pipeline projects Nord Stream-2 and TurkStream, the issue of decarbonisation of natural gas as well as the Baltic states’ desynchronization from the BRELL energy circuit.