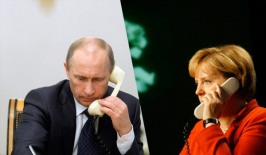 At the initiative of the German side, Vladimir Putin had a telephone conversation with Federal Chancellor of the Federal Republic of Germany Angela Merkel.

Vladimir Putin and Angela Merkel exchanged views on the current situation on the Korean Peninsula in the context of the latest provocative actions by the DPRK and strongly condemned Pyongyang's disregard of UN Security Council resolutions. It was noted that such steps are contrary to the principles of global non-proliferation and pose a serious threat to regional peace and security.

It was confirmed that this acute crisis can only be resolved by political and diplomatic means, by resuming negotiations of all the parties involved. It was agreed to continue discussing the situation at the level of the foreign ministers of the two countries.

The implementation of the Minsk agreements on the settlement in southeast Ukraine was addressed. It was underscored that any violation of the ceasefire regime, undermining the so-called ”school truce“, agreed in the Contact Group and supported by the leaders of the Normandy format states, would be unacceptable.

Vladimir Putin spoke in detail on the Russian initiative to establish a UN mission to aid the protection of the OSCE Special Monitoring Mission (OSCE SMM). Taking into account the views communicated by Angela Merkel, the Russian leader expressed readiness to add to the functions of the above-mentioned UN mission proposed in the Russian draft resolution of the Security Council.

The protection of OSCE observers by the UN is envisioned not only on the contact line after the disengagement of the forces and equipment of both sides, but also in other places where the OSCE SMM conducts its inspection visits in accordance with the Minsk Package of Measures.