Talks concluded between Russia, Ukraine and EU on gas supplies from Russia to Ukraine for the winter 2014/2015 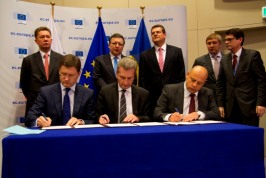 On 30 October 2014 negotiations between Russia, Ukraine and the European Commission on Russian gas supplies to Ukraine for the 2014/2015 winter period were concluded in Brussels. The trilateral protocol laying down general principles of natural gas supplies from Russia to Ukraine from November 2014 to 31 March 2015 was signed by the Minister of Energy of Russia, Alexander Novak, the Minister of Energy and Coal Industry of Ukraine, Yury Prodan, and Vice-President of the European Commission, Guenther H.Oettinger. The Chairman of the Management Committee of JSC “Gazprom”, Alexey Miller, and head of NAK ”Naftogaz of Ukraine”, Andrey Kobolev, signed an addendum to the contract of 2009 on technical aspects of gas supply for this period.

The documents set out the following general principles of ensuring natural gas supplies.

First. The Ukrainian side undertakes to pay Gazprom the debt for gas delivered in November and December 2013 and in April, May and June 2014 in the amount of 3.1 billion US dollars. The payment will be executed in two tranches: the first amounting to 1.45 billion US dollars and the second amounting to 1.65 billion US dollars. The payment of the first tranche will open the way for resumption of gas supplies to Ukraine. The second tranche should be paid by 31 December 2014, which will allow to continue gas supplies in January-March 2015. The 3.1 billion US dollars represent part of the accumulated debt to Gazprom undisputed by the Ukrainian side. The Russian side expects that the rest of the debt (according to calculations of the Russian side, the total debt due to Gazprom amounts to 5.3 billion US dollars) is to be paid by the Ukrainian side after respective decision is issued by the Arbitration Court of the Stockholm Chamber of Commerce.

Second. Russian gas will be supplied to Ukraine on pre-payment condition.

Third. The Russian Government has agreed to exempt gas supplies to Ukraine from the export customs duty which currently amounts to 100 US dollars for 1000 cubic metres. This goodwill gesture will be formalised by a Decree of the Government of the Russian Federation.

Fourth. The gas price is calculated through a special formula and is dependent on the situation in the oil market. Estimates suggest that in the 4th quarter of 2014 and the 1st quarter of 2015 Ukraine will pay 365-378 US dollars for 1000 cubic metres of Russian gas.

Fifth. These modalities of natural gas supplies are fully in line with the conditions laid down in the gas purchase/sale contract between JSC “Gazprom” and NAK “Naftogas of Ukraine” of 19 January 2009 and do not require any changes to the contract.