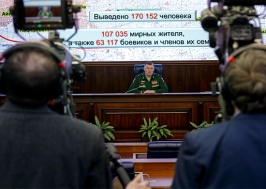 The Russian Centre for Reconciliation jointly with the Syrian authorities is completing the large-scale humanitarian operation in the suburbs of Damascus – the Eastern Ghouta. In total, 170,152 people have been evacuated during the operation, including 63,117 militants with their families.

All the settlements in the Eastern Ghouta are currently under the control of the Syrian government.

The Russian military police has been deployed in the Eastern Ghouta in order to monitor situation and maintain law enforcement.

As environment in the suburbs of Damscus stabilizing, people are making their way back home. In total, some 63,000 people have return to their homes now. It makes a half of those who had left the area.

The Syrian government working on rehabilitation of destroyed civilian infrastructure. Power and water supply systems have been recovered; reconstruction is underway in the area. People are provided with medical assistance.

Thus, the present-day Eastern Ghouta is far from a “black hole” where no one could get to, but a capital suburb returning to peaceful life.

Situation is under control of the lawful authorities that is taking measures to recover trade, adjust prices, render services for civilians, and rehabilitate schools.

All conditions are being established to ensure swiftly normalize environment in the area.

Meanwhile, residents of the Eastern Ghouta that had suffered violation from terrorists for many years badly need humanitarian assistance.

Russia was the first to render this assistance.

The Russian Centre for Reconciliation has delivered 520 tons of food supplies, more than 50 liters of bottled water, 9,000 sets of bed linen, and provided with engineering equipment to remove rubbles.

Today, a convoy carrying construction equipment, trucks, steel tubes for water supply system, and required equipment for overhauling power systems have been sent to the city of Douma.

Another five such convoys are to depart to Douma next week.

It is to be stressed that all the construction equipment and materials delivered by the convoys to the Eastern Ghouta shall be handed over to the UN representatives in Syria for further distribution among civilians. It is Russia’s contribution to the UN humanitarian assistance for people in Syria.

One should pay attention that it is the real help that Russia is providing to real civilians in Syria, rather than hollow promises made by some western countries.

It is common knowledge that not everybody feels comfortable with such progress on the way to restoring peaceful life in Syria.

The Syrian legal government has been receiving from the USA and western countries baseless and flimsy accusations of alleged chemical attack against civilians in the Eastern Ghouta.

After about a week, the USA and some European countries provided no evidence on alleged using of poisonous agents by the Syrian troops on April 7 in the city of Douma.

The Russian Ministry of Defence has overwhelming evidence that in Douma on April 7 there was a planned provocation in order to deceive the world community. Its original purpose was to provoke missile strikes by the USA against Syria.

It is to be reminded that a video clip recorded at the Douma hospital where injured people were allegedly brought to is the key ‘evidence’ of all these accusations made by western countries.

However, we managed to find those who directly had taken part in this footage, and to ask them questions.

Today, we show an interview with these people.

Citizens of Douma told how a staged clip had been recorded, in which episodes they had participated and what roles they had had.

Besides, they showed shots with them in the clip.

Both persons involved in the clip have medical degree and work in emergency department of the Douma Hospital.

According to them, those who had been brought to the hospital had no injuries caused by chemical agents.

When civilians were receiving first aid, some unidentified people rushed in the hospital.

Some of them had video cameras. These people started shouting, spreading panic, and dousing other people with water. They shouted that all people in the hospital were victims of chemical weapons use.

Patients and their relatives started dousing each other with water.

After the action was filmed, the unknown persons escaped immediately.

As it can be seen, these Syrians demonstrate themselves at the footage.

It is to be noted that these people do not hide their names. These are not some impersonal messages on social networks or statements of anonymous activists.

It is to be stressed once again that these are people who became direct participants in filming these footage.

These facts are the evidence in the civilized world, and are not unfounded and irresponsible accusations spread with the aim of hanging labels and denigrating the leadership of other countries.

Earlier, Russia had made numerous warns on all levels about provocations of chemical weapons use organized by insurgents in the Eastern Ghouta.

Today, there are other evidences at the disposal of the Russian military department, which testify to the direct participation of Great Britain in organizing this provocation in the Eastern Ghouta.

The Russian party knows for certain that from April 3 to 6, representatives of the so-called White Helmets were influenced by London for the speedy implementation of the provocation prepared in advance.

The White Helmets received information that Jaysh al-Islam militants were to conduct a series of powerful artillery shelling of Damascus on April 3 to 6.

This will promote a response from the government troops, which the White Helmets’ representatives will have to use to carry out provocations with alleged chemical weapons.

Today, a group of experts from the Organization for the Prohibition of Chemical Weapons is arriving in Syria.

The Russian Reconciliation Centre is ready to provide security and necessary work conditions in the Eastern Ghouta to them.

The Russian party hopes that the OPCW group will be guided not by some third party’s requirements and anonymous pseudo-evidences from social networks, but will conduct an objective and independent investigation to ascertain the truth.

The Russian Defence Ministry is confident that the responsible position of the OPCW will reduce the degree of tensions in the region and thereby preserve the fragile peace that was established in Syria.

Taking into account that peaceful life is returning to the Eastern Ghouta, the attention is to be drawn to the ongoing humanitarian disaster in Raqqa, which had been liberated five months ago by the United States and the countries of the so-called International Coalition.

On April 10, the World Health Organization (WHO) prepared a report.

The document indicates that civilians returning to the city of Raqqa are daily endangered by the huge amount of scattered ammunition and improvised explosive devices.

According to the WHO experts, from October 1, 2017 to February 28 2018, more than 660 Syrians received wounds and injuries of varying severity. More than 130 people were killed.

Every day, up to six explosions of civilians occur. In this case, most often the victims are children and adolescents.

According to the WHO, there are only two hospitals in Raqqa. They are overcrowded and fail to provide assistance to all injured.

The experts emphasize that residents of Raqqa are deprived of humanitarian aid because of the lack of representative offices of international profile organizations in the region and the inability of local authorities to remedy the situation.

Extremely severe and epidemiological situation is in Raqqa. Until now, thousands of corpses are decomposing under the ruins of the city.

The city is 70 percent wiped off the face of the earth as a result of the bombing by the US AF.

These are assessments made by representatives of international organizations.

In this regard, it is to be reminded that the work of schools, hospitals, and social institutions has been restored in all territories liberated from terrorists by the government troops. There are markets, businesses and housing are being restored.