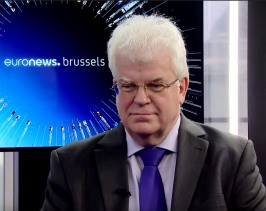 Euronews: What was your first thought when you learned about the American strike in Syria?

Vladimir Chizhov: I’ll tell you frankly, it was a sense of deja-vu of how the events had unfolded in the Balkans, then in Iraq and Lybia. Well, it is another repetition of irresponsible behaviour.

Euronews: The new American President Donald Trump is tougher than his predecessor, so it could be something very different?

Vladimir Chizhov: As far as President Donald Trump is concerned, you’d better ask him. He has criticised on record his predecessor dozens of times on various subjects, including situations when the Obama Administration was interfering in other countries’ affairs. He was saying back in 2013 and 2014, long before he decided to run for the highest office, that he was against the US getting directly engaged in Middle East affairs and in particular in Syria.

Euronews: But something must have been done after this horrific chemical attack in Idlib. Don’t you think in parallel with the Americans?

Vladimir Chizhov: Something evidently needed to be done. International investigators should have gone to that particular place and completed their investigation. There is already a mechanism under the auspices of the UN and the OPCW – the Organisation on Prohibition of Chemical Weapons – that had been working in Syria. By the way, that organisation had confirmed earlier that the Assad Government does not possess any chemical weapons whatsoever – that is in their report.

Euronews: And what is Russia going to do with the Assad regime? It said that its support for Damascus was not unconditional.

Vladimir Chizhov: Russia’s support for the Syrian regime has never been unconditional, but we believe that what happened in the last 48 or 72 hours in Syria has all the traits of a provocation, I would say. It is evident and can certainly be confirmed by international monitors and investigators when they go there, that the responsibility for the very tragic chemical incident lies with the so-called “moderate rebels” rather than with the Syrian government.

Euronews: What do you think about the reaction here in Brussels? It looks like the EU and US are now being pushed closer together because they have a common aim in Syria. Don’t you think that Russia will be sidelined?

Vladimir Chizhov: I think we all have the same aim in Syria, which is to bring peace to that war-torn country. And we have an overarching aim, which goes beyond Syria, of combating international terrorism. So that is what we should focus on, all of us – the US, EU, Russia and countries of the region as well.

Euronews: Russia says it will strengthen its air defence in the area and there are reports about naval movement in that direction while EU High Representative for Foreign Affairs and Security Policy Federica Mogherini warned against a military solution of the Syrian conflict.

Vladimir Chizhov: I think there is a clear-cut signal sent to the US by the EU that there is no military solution. Russia never had a goal of achieving a military solution. Our country, totally different from the US, has been deploying its Air Force and naval resources to Syria on a legitimate basis at the request of the legitimate Syrian Government. Actually, the presence of US troops on the ground and in the air space of Syria was illegal in the first place. Now the air strikes, of course, are a clear violation of international law.

Euronews: So, what is Russia going to do?

Vladimir Chizhov: Russia will demand the UN Security Council to be reconvened the sooner the better in New York. I know that other countries are saying the same. We will certainly push for the UN SC to give an objective view of this situation and then provide an impetus for the international monitors to go to that particular place and investigate.

Euronews: “In 2013 Russia was supposed to destroy Syria’s chemical weapons…”

Vladimir Chizhov: “First of all, it was not a Russian promise. In 2013 it was an endeavour undertaken by the whole international community, Russia included, to assist the Syrian Government in destroying the arsenal of its chemical weapons as the Syrian Government had committed itself to doing. And that was done.

Euronews: “But we see it in action…”

Vladimir Chizhov: “The chemical weapons were stockpiled and evidently produced by opposition groups active in Syria, primarily the outlawed ISIS or Daesh and Al-Nusra groups in the territories that they control. I would not want to speculate whether it is something they managed to hide for several years or they have a production line, which would be even more dangerous”.

Euronews: “It’s a very emotive subject and President Trump was probably moved by pictures of poisoned children, women. Do you understand this motive and would Russia do the same if it had means?”

Vladimir Chizhov: “People could have been much more motivated had they seen pictures of several hundred civilians killed by US-led coalition air strikes in Iraq, near Mosul.

I think that it is the duty of every leader to take decisions based not on personal emotions, but rather on hard facts. Unfortunately, this decision on air strikes was taken by Washington without hard facts in hand”.

Euronews: Thank you very much.