Statement for the press following visit to Berlin 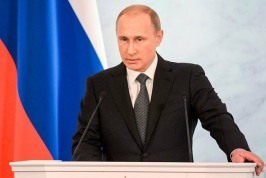 Following negotiations on a settlement in Ukraine and the situation around Syria, the Russian President made a statement for the press.

I would like to say a couple of words regarding the agreements reached with my colleagues.

We devoted a great deal of attention to security matters and agreed on a range of issues regarding further immediate actions to resolve the situation with disengaging the conflicting sides. We agreed to continue searching for locations where these efforts can be continued. In two locations the disengagement has already taken place. We confirmed our readiness to expand the OSCE mission in the disengagement zone and in locations where heavy equipment is stored.

We confirmed that we will continue our joint efforts on the political track, including those directed at reaching final endorsement on the procedure for implementing the agreement on the special status of certain areas in Lugansk and Donetsk regions, in the Lugansk People’s Republic and the Donetsk People’s Republic.

We also agreed on certain – only some, unfortunately – humanitarian matters. Regrettably, we did not make much progress here, though we did express our readiness to resolve humanitarian issues. Here progress was probably minimal, because this is mainly linked to arranging social payments and benefits. Unfortunately, no progress has been made here. This was the first part of our meeting.

The second matter, discussed with our European – German and French – colleagues dealt with the situation around Syria and Syrian settlement in general.

I informed our European partners of our view on the developments there and on what needs to be done immediately to fight terrorism, to root out terrorism on Syrian soil, to make sure this hotbed does not flare up again in the future, and, of course, what should be done to ensure that our efforts lead to a final settlement. Primarily we spoke of the political component in this process.

I reminded our colleagues yet again that Russia suggests stepping up efforts to develop and adopt a new constitution, on the basis of which preliminary elections could be held and a preliminary agreement could be reached between all the conflicting parties. This would naturally have to involve all the countries in the region drawn into the process.

We also informed them of our intention, the intention of the Russian side to extend the pause in air strikes for as long as possible, based on the actual situation in the area. We are ready to do this until the rebel groups in Aleppo step up their activities.

We also expect our partners, primarily our American partners, to do everything they have promised so far to disengage the Jabhat al-Nusra terrorists and similar terrorist groups from the so-called healthy opposition, so we can see what we need to do next together.

This is generally what our discussions today were about and what we have managed to agree on.

Now I think it is time for you too to go home and get some rest. That you very much for your joint efforts.