Statement by President Vladimir Putin on the situation in Ukraine 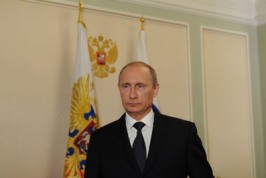 President of Russia Vladimir Putin: In response to the terrible tragedy that took place over Donetsk, I want to reiterate Russia’s position with regard to the current situation in Ukraine.

We have called repeatedly on all parties to the conflict to stop the bloodshed immediately and begin negotiations. I believe that if military operations had not resumed in eastern Ukraine on June 28, this tragedy probably could have been avoided.

At the same time, no one should and no one has the right to use this tragedy to pursue their own political goals. Rather than dividing us, tragedies of this sort should bring people together. All those who are responsible for the situation in the region must take greater responsibility before their own peoples and before the peoples of the countries whose citizens were killed in this disaster.

Everything possible must be done to ensure that international experts can work in safety at the crash site. Representatives from the Donbass region, Donetsk, Ukraine’s Emergency Situations Ministry, and Malaysian experts are already working at the site, but this is not enough.

It is essential that a full-fledged group of experts under ICAO aegis, an appropriate international commission set up for the task, be able to work at the crash site. We must do everything possible to ensure their complete and guaranteed safety and provide them with the humanitarian corridors they need for their work.

For its part, Russia will do everything within its power to move the conflict in eastern Ukraine from the military phase we see today to the negotiating phase, with the parties using peaceful and diplomatic means alone.