From Stalingrad to Prague: historic exhibition opening in Strasbourg 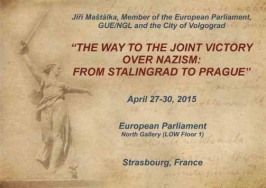 Unique documents and pictures featuring the Battle of Stalingrad and the liberation of European cities in 1944-1945 form the centrepiece of the international exhibition “The Way to the Joint Victory over Nazism: From Stalingrad to Prague”, organised on the premises of the European Parliament in Strasbourg on April 27-30, 2015. The project aims to remind of the tragedy and heroism of World War II and our joint Victory over Nazism, when peoples of different countries stood together in the struggle against the “brown plague”. The exhibition invites to a dialogue on the high value of this unique experience in today’s world, 70 years after the Great Victory.

The exhibition, jointly initiated by the municipality of Volgograd (Russia) and MEP Jiří Maštálka (Czech Republic), is dedicated to the anniversary of the Victory of Allies of the Anti-Hitlerite coalition over Nazism in Europe during World War II. This is a project of people’s diplomacy. Volgograd’s twin-cities in the United Kingdom, Poland, France and the Czech Republic, Members of the European Parliament, civil society and academia have taken part in its preparation.

The victory of Soviet troops in Stalingrad in February 1943 marked a turning point in World War II and set the hearts of millions of people alight with hope and admiration. It was the Battle of Stalingrad that inspired the Allies with confidence in their ultimate victory. From the walls of impregnable fortress of the Volga river started a long road to Berlin and Prague which brought the liberation of Europe from Nazism. The friendship binding together Soviet Stalingrad, British Coventry and Czechoslovak Ostrava during the war gave birth to the international twinning movement which currently unites thousands of cities in their desire for peace and cooperation.

The project’s title underlines the historic course of events: even after the act of unconditional surrender was signed by Nazi Germany in Berlin, shooting continued on the outskirts of Prague where hostilities ended only on May 12, 1945.

This project invites us to look at the history of the most terrible catastrophe of the 20th century through the eyes of its participants. Unfortunately, ideologies of hate opposed to the human spirit remain a tangible threat even in the 21st century. Under these circumstances, the words of Julius Fučík, antifascist Czechoslovak journalist murdered in Gestapo torture chambers, sound as a warning to us: “People, I loved you all. Be vigilant!” This was the final sentence in his very last “Notes from the Gallows”, the pages of which are used as a background for the 29 posters of the exhibition.

The opening ceremony of the exhibition will take place on 28 April at 2:00 p.m. with the participation of Ambassador Vladimir Chizhov, Permanent Representative of the Russian Federation to the European Union, Andrey Kosolapov, Head of Volgograd, Members of the European Parliament, diplomatic corps, politicians and public figures.