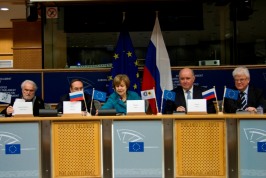 It is an honour to be invited to the Eighth European Russian Forum, which is again being held in the European Parliament, and to share the Russian perspective on the situation in Europe and on ways to improve it.

I’d like to begin by reading Russian Foreign Minister Sergey Lavrov’s message of greetings to the forum organisers and participants.

For my part, I’d like to say that we welcome civil society’s active involvement in the evaluation of complicated processes underway in Europe. We are convinced that pubic organisations are making a positive contribution to humanitarian, cultural and economic rapport between nations. It is obvious that various forms of cooperation between NGOs allow us to take a broader view of issues than is possible within the framework of official diplomacy. It is vital now to conduct an open dialogue on any issue, even the most delicate.

This is especially necessary now that the EU leadership is discussing if Russia is a “strategic problem” or a partner in the solution of strategic issues.

The theme and agenda of this conference are of immediate interest. A deep political crisis in Ukraine, which needs to be resolved, has complicated the situation in the Euro-Atlantic region and put Russia-EU relations to the test. This is undermining confidence in Europe and hindering the progress of mutually beneficial cooperation. We believe that this is not a coincidence but a result of serious systemic problems that have accumulated over the past two decades.

Europe has suffered many shocks in the past century, including two world wars, the anniversaries of which are being marked this year. Those tragic events show the dire ends to which nations can be led by believing in their exclusiveness, by attempting to strengthen their security and to achieve their interests at the expense of others, and by playing questionable zero-sum geopolitical games. These lessons of history should be used to strengthen collective responsibility for a peaceful and safe future for our continent, and to encourage politicians to show wisdom when taking foreign policy decisions.

We seem to have all the necessary conditions for Europe to advance on a sustainable path of mutually beneficial partnership and prosperity in the best interests of this and future generations. The ideological barriers that divided the continent were removed, and the Berlin Wall, which symbolised them, fell a quarter of a century ago.

Unfortunately, we missed that unique opportunity. The United States and other Western countries have continued to divide countries into “us and them”, and disregarded Russia’s repeated calls for creating a system of cooperative and indivisible security. No practical steps have been taken to implement declarations to this effect, adopted within the framework of the OSCE and the Russia-NATO Council. The EU partners’ policy has prevented the lifting of visa barriers, a vestige of the past that is seriously hindering the growth of economic, humanitarian and cultural cooperation and human contacts.

The actions of our Western partners have been based on an archaic logic of headstrong expansion of geopolitical control in Europe and the movement of dividing lines further east. Contrary to promises given to us, including at the top level, NATO has been approaching our borders ever closer, although back in 2008 Russia proposed codifying these agreements and drafting a European Security Treaty. Unfortunately, once again, our proposals have not been heard.
History shows – and as Russian historian Vasily Klyuchevsky said, history punishes those who haven’t learnt their lessons – that attempts to isolate Russia have invariably resulted in dramatic consequences for Europe, while Russia’s active involvement in European affairs has brought about long periods of peace and sustainable development.

All these problems have had an effect on Ukraine. We have warned more than once about the counterproductive nature of the Eastern Partnership programme, which is designed, truth be told, at separating the so-called focus countries from Russia and at severing relations that have linked out countries for centuries.
The fragile Ukrainian state broke down under the unprecedented pressure aimed at forcing it to make an unnatural choice between cooperation with the East and with the West under the slogan, “you’re with us or against us.” The attempts to blame this on Russia are futile and completely illogical. The truth about the developments in Ukraine is finding a way even into biased Western media.

Obviously, the free expression of will by the Crimean people in full accord with the standards of international law and the UN Charter has come – let me emphasise this – only as a reaction to the coup. Instead of trying to consolidate Ukrainian society and putting forward a positive nationwide agenda, the radicals who seized power in Kiev plunged Ukraine into chaos and bloodshed, and unleashed a fratricidal war in the southeast.

I will mention in passing that the anti-government protests were triggered by Viktor Yanukovych’s decision to postpone the signing of the economic part of an association agreement with the EU with a view to analysing its implications for the Ukrainian economy. Today, this decision – on postponing the enactment of the economic provisions of this agreement until January 1, 2016 – was made following consultations between EU, Russian and Ukrainian representatives. The question arises: Why did the legally elected president have to be ousted and why did blood have to be shed?

Citing the Ukrainian events as a pretext, the North Atlantic alliance slipped into “cold war” rhetoric, suspended cooperation with us, to the detriment of its own interests, and declared its intention to build up its military presence and increase the number of exercises near the Russian borders. Such a destructive line seriously erodes stability in the Euro-Atlantic region and, of course, is not conducive to the strengthening of trust in Russian-Western relations.

At the same time, I would not describe the state of affairs in the world as a new “cold war”. There are no grounds to say that. Slipping into confrontation, the “eye for eye” principle is not our choice. As President Vladimir Putin has repeatedly stressed, Russia is not threatening anybody and does not intend to become involved in geopolitical games and intrigue, let alone conflicts, whoever tries to drag us into it, or however hard they tried. We will work under the conditions now prevailing and we are always prepared for dialogue.

I am confident that we are in a position to overcome the existing disagreements, including on Ukraine. To this end, it is necessary to abandon the vicious logic of unilateral actions and attempts to solve all issues exclusively in one’s own narrow-minded, selfish interests. It is vital to adhere to the standards of international law, and respect each other’s interests.

Today, a real opportunity has emerged for putting an end to the civil war in Ukraine. The first steps in this direction have already been made. I mean the protocol on joint efforts, which was signed in Minsk on September 5, and the Minsk memorandum on the ceasefire in Ukraine of September 19, which should be meticulously followed. We regard these documents as a key framework for movement toward the peaceful settlement of the internal Ukrainian crisis and are prepared for an inclusive dialogue in a search for ways to achieve national accord and a discussion of the country’s political future and constitutional order.
We are for the establishment of a stable direct dialogue between Kiev on the one side, and Donetsk and Lugansk on the other, and will in the future continue to facilitate the resolution of problems that the Ukrainian people have encountered. In the interest of preventing a deeper divide in Ukrainian society and strengthening European security, it is extremely important for Ukraine to preserve its non-bloc status.

We intend to provide all-round assistance to promoting a favourable environment to facilitate the resolution of the large-scale problems facing the fraternal Ukrainian people. At the same time, our partners should realise that attempts to exert pressure on Russia through unilateral sanctions, the use of which is illegitimate and has been condemned by UN General Assembly resolutions, only undermine the efforts to stabilise the international economy and do not bring a resolution to the Ukrainian crisis an inch closer.

We proceed from the premise that there is no real alternative to mutually beneficial and equal cooperation between Russia and the EU: We have too many geographical, economic, historical and personal ties. The EU is our natural and most important trade and economic partner. Russia will remain the largest supplier of hydrocarbons in the foreseeable future.

I would like to stress that despite our active efforts to step up cooperation in the Asia Pacific region, Russia is not turning its back on Europe. Quite the contrary, we are prepared to expand cooperation with our European partners and take practical steps to create a unified economic and humanitarian space from the Atlantic to the Pacific, based on the principles of equal security and broad cooperation.

Obviously, it is possible to ensure for our continent a respectable place in a new international system only by integrating the capabilities of all its countries, which can give a powerful impetus to their development and consolidate their positions on the international arena. We have all the prerequisites for that: common civilizational and cultural roots, a high degree of economic complementarity, and commitment to uniform rules of trade in compliance with WTO standards that underlie the development of both the EU and the Eurasian Economic Union, which will be up and running from January 1, 2015.

Within the framework of this wide-ranging project, it is possible to ensure the harmonious development of all states, both those affiliated and not affiliated with various integration associations. Regarding Ukraine, it would play a natural role as a bridge between the west and the east of the Eurasian space. The first step could be the start of negotiations on the creation of a zone of free trade between the EU and the EAEU

Needless to say, such efforts are inconceivable without respect for state sovereignty and without abandoning the practice of interference in their internal affairs and of providing support for the unconstitutional change of government in other countries. Otherwise we will continue to encounter crises similar to that in Ukraine.

An important role in strengthening mutual understanding in the region and in the search for solutions to the existing problems belongs to the OSCE, including the Helsinki+40 process, which was launched ahead of the Organisation’s anniversary next year. After all, the OSCE was originally conceived to eliminate a variety of dividing lines. This will be our premise at the meeting of OSCE foreign ministers in Basel, due in several days.

Russia is prepared to cooperate with all those who are willing, on the basis of equality and respect for mutual interests. We will continue to prioritise an integrated, positive agenda, aimed at developing productive ties between states. Practice shows that the pooling of the international community’s efforts that are based on international law with the central coordinating role of the UN is conducive to the achievement of positive results in the resolution of even the most formidable and challenging problems today.

Our common goal is to prevent both a “cold” and “hot” war and move away from the instincts and geopolitical stereotypes of the past. It is extremely important to establish a system of exacting and demanding partnership, based on genuine respect for mutual interests. We are confident that this is within our power.