Speech by President Putin at the Russia-EU summit meeting 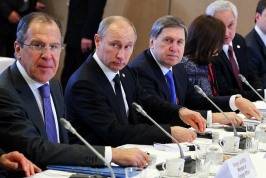 Mr Herman Van Rompuy already mentioned that this is the 30th Russia-EU summit we are holding. The consistent and regular nature of our dialogue proves that both sides are interested in developing partnership relations.

Since the last summit held in June, quite a few topics came up that need to be discussed in detail. Already yesterday we started our exchange of views on the current economic situation in Russia and in the European Union. Our European colleagues told us about the steps they are taking to normalise the situation in the euro zone.

I outlined the situation in the Russian economy: on the whole, we are satisfied with the way things develop in our economy, but of course there are problems and concerns, quite a few of them, actually.

The Eurasian economic integration between Russia, Belarus and Kazakhstan becomes an increasingly important factor in our relations. We have been keeping you updated along the entire integration process, and I would like to say once again that this work and this association are based entirely on the WTO principles.

And we believe that introducing the WTO rules in the economic life of not just Russia, but our close neighbours Kazakhstan and Belarus too, would make it easier for European economic entities to work in this big market with a total population of 170 million people.

We will have to discuss the way we will be implementing the road maps to form the four common Russia-EU spaces. We’ll take a look at how the work proceeds in terms of sectoral dialogues and exchange views on the progress in implementing our joint Partnership for Modernisation initiative.

We believe that the new Russia-EU framework agreement will play key role here. The work on it is still underway, and I hope it will progress steadily given the interest of both parties.

My colleagues have already mentioned that last August Russia became a full-fledged member of the World Trade Organisation. I would like to once again thank our colleagues, everybody present here, for their on-going support of Russia’s bid for the WTO membership.

I expect that we can achieve progress in resolving the visa issue. Mr Barroso just spoke about this problem. We don’t want to make the situation any tense here, but we are all doing specific work. I have a long list of countries that enjoy a visa-free regime with the EU. It includes Venezuela, Guatemala, Honduras, Mauritius, Mexico. You name it. Forty countries located thousands of kilometres away from the EU. On November 7 the European Commission suggested adding a number of island nations to this list, including five Caribbean and ten Pacific island nations.

Russia and EU have a trade turnover of almost $400 billion. And the lack of freedom in contacts between our people is a factor that hinders the development of our economic ties, and we must understand that. I hope that our work in this area will also move ahead without any politicization.

Our agenda also features the issues of energy cooperation. You know our position on the third energy package. Of course, the EU can take any decisions, but – as I already said at our meeting in St Petersburg and I will say it again here – we are stunned, putting it lightly, by the fact that this decision is given retroactive force.

We believe that this decision is absolutely wrong, I will go even further – it is ‘uncivilised’. If you approve a document, it should apply to all deals closed thereafter. And if you approve a document and then apply it to everything that happened before, it only causes confusion and undermines trust in joint work.

I hope that here too we will find an acceptable and mutually beneficial solution, based on the fundamental interest in developing our relations.

Thanks you for your attention.